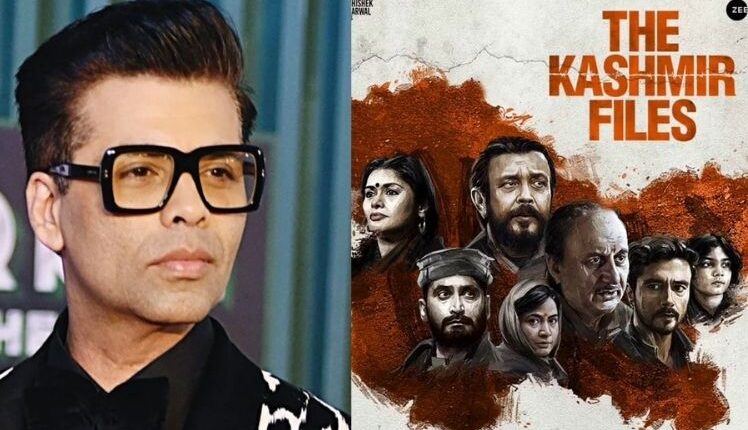 ‘The Kashmir Files’ Is No Longer A Film, It’s A ‘Movement’: Karan Johar

Mumbai: After The Kashmir Files become a box-office hit, entire Bollywood including eminant personalities of the country are also lauding the film.

Many Bollywood celebrities are also cheering for Anupam Kher, Pallavi Joshi, Mithun Chakraborty and Darshan Kumar for their lively acting in the film.

And at the same time, Karan Johar has also called the film a ‘movement’ in his latest interview.

The film, which is based on the exodus of Kashmiri Pandits in the Kashmir valley in 1990, has also earned critical acclaim.

In an interview with Gatalla Plus, Karan Johar heaped praise on The Kashmir Files. He also spoke about the success of the Vivek Agnihotri directorial venture. “The Kashmir Files is not made on the budget like a lot of other movies. But it is probably going to be cost-to-profit the biggest hit of Indian cinema. I read on Box Office India and they said that such a movement hasn’t happened since Jai Santoshi Maa, since 1975,” said Karan.

The filmmaker went on to add, “You have got to acknowledge there is something that is connecting with this nation and academically, you have to watch it. You have to watch it to absorb, to learn from it that look, there is this movement that has happened. It’s no longer a film, it’s a movement.”