The Indian Men’s and Women’s Hockey team superstars, who made the country proud in Tokyo Olympics 2020, were guests in the recent episode of ‘The Kapil Sharma Show’.

Odisha Chief Minister Naveen Patnaik was also seen on the show. Through a video message, the Odisha CM congratulated the players of both the men’s & women’s hockey teams for excelling at Tokyo Olympics 2020. Naveen also thanked the show’s host, Kapil Sharma, for encouraging the hockey players.

Apart from the Odisha CM, Special messages from veteran Bollywood actors Dharmendra, Shatrughan Sinha were played during the show where they extended their heartfelt wishes for the Hockey players and prayed for their good health. 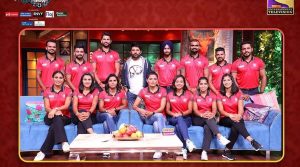 The Men Hockey Team narrated their experience of interacting with Prime Minister Narendra Modi. The team spoke about the language barrier and a few funny incidents related to the English language. The women’s team and men’s team also discussed their diet and said that due to this Olympics, people’s interest has increased in Hockey.