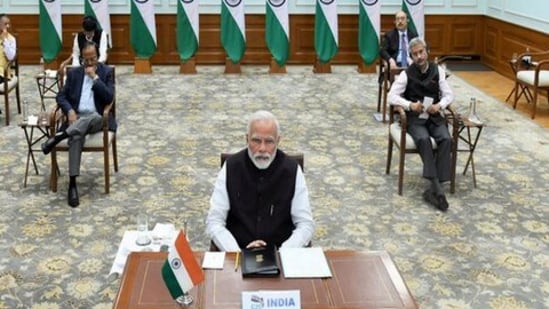 New Delhi: Speaking at the 18th SAARC summit in Kathmandu in 2014, the last one of the grouping, Prime Minister Narendra Modi said: “The future I dream (of) for India, is the future I wish for the entire region.”

The 19th SAARC summit in Islamabad was put to sword by Pakistan based terror group Jaish-e-Mohammed, which attacked the Uri Brigade headquarters and killed 19 Indian Army troopers and injured another two score on September 18, 2016.

Except Nepal, the chair, all other SAARC countries walked out of the summit with India.

Eight years after the last summit, Afghanistan is under the rule of a radical Islamist Taliban regime with total budget for the current year (as announced on May 18) a mere $2.6 billion. The country is on verge of famine and disease as the ISI-sponsored Haqqani Network led by global terrorist Sirajuddin Haqqani fights for the control of Kabul with the Kandahar Taliban led by Mullah Omar’s son Yaqub. Economically ravaged, the country is on life-support, with jihad and drugs being its only global exports.

Relations with Islamabad are yet to be normalized and remain toxic due to relevance of Kashmir as a political card and perceived vote catcher for Pakistani parties. While the Pakistan Army sees no return on its investment when it comes to Kashmir, proscribed terror groups in that country collect huge funds in the name of jihad in Valley. SAARC is dead, and it is time to move on.