Tennis history: The greats after whom Roland Garros stadium/tennis courts are named after

We just saw a very interesting French Open 2021, where Novak Djokovic got the better of Rafa Nadal for just the second time in nine matches and went on to win his 2nd French Open and overall 19th Grand Slam title.

The French Open is played at the Stade Roland Garros or the Roland Garros Stadium. This 34-acre complex includes 3 main stadiums, 20 courts, VIP area, Press area, tennis museum and so on.

The complex was constructed in 1928 to host France’s 1st defence of the Davis Cup. The complex is named after Roland Garros and the three stadium courts are Court Phillippe Chatrier, Court Simone Mathieu and Court Suzanne Lenglen.

Let us see who these famous personalities were and explore some rare trivia about them.

Roland Garros was a pioneering aviator from France. In his childhood, he suffered from pneumonia and took up cycling to restore his health. In the process, he became a cycling champion. He was also fond of rugby, football and tennis.

At 21, Roland had a car dealership. He was a personal friend of Italian-born French car designer and manufacturer Ettore Bugatti and he was himself one of the 1st ever owners of a Bugatti car. In 1903, the Wright brothers invented the 1st successful aeroplane. 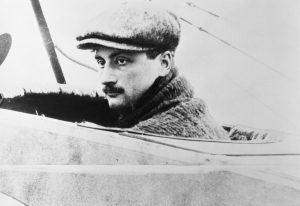 Roland saw an aircraft for the 1st time when he was 21 ( in the year 1909), and he knew that he HAD to be a pilot. He got his pilot’s licence the next year and his progress was very very fast, and every year he graduated to a superior aircraft. When World War 1 broke out, he joined the French army.

In World War 1, Roland acquitted himself with distinction as a fighter pilot. There was a myth of his flying his plane into a Zeppelin, destroying the airship and his own plane and sacrificing himself. However, the myth was quickly discarded. What was a reality however was that Garros achieved the 1st ever shooting down of an aircraft by an aviator fighter in a monoplane fighting through a tractor propellor. Two more German aircraft were shot down as well and the Aero Club of America awarded him for this invention.

In 2015, he was shot down and captured and became a POW for three years. He escaped from captivity and returned to France via the Netherlands. He rejoined the French army and achieved two more air victories. Then a month before the war ended, he was shot down and killed in an aerial battle. The next day would have been his 30th birthday.

Roland Garros will be remembered in history forever. The Stade Roland Garros complex, which hosts the French Open has been named after him. This was in 1928 itself. What a great honour for such a great man. 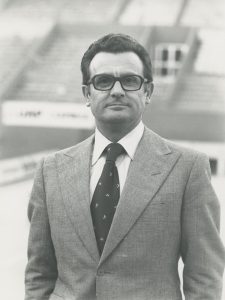 Philippe Chatrier was a tennis player turned tennis administrator. As a player, he had no extraordinary achievements. He was French Junior tennis champion and reached the third round of the French Open once and the third round of Wimbledon once. However, he was a very revered tennis administrator. He captained the French Davis Cup team. He was President of the French Tennis Federation for 20 years and President of the ITF for 14 years. His crowning glory was the re-introduction of tennis to the Olympics in 1988.

In 2001, the main tennis court at the Stade de Roland Garros which had a capacity of over 15000 spectators was named in his honour. Before that, it had simply been named Court Central.

The four main spectator grandstands are named after the four musketeers of French tennis, Brugnon, Borotra, Cochet and Lacoste ( I have written a separate blog on them). The trophy awarded to the Men’s singles champion every year is named the La Coupe des Mousequetaires.

Suzanne Lenglen is considered to be the first global female sports celebrity- across sports. The French Press called her La Divine (the Goddess). She was the inaugural world number 1 in ladies tennis and was world number 1 for 6 years in a row. She won 8 Grand Slam singles titles, 6 at Wimbledon and 2 at the French Open. In 1925 and 1926, she swept the singles, doubles and mixed doubles titles. 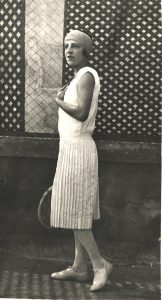 The match between Suzanne and Helen Wills in 1926 was billed the match of the century. Suzanne was expected to win easily. There was an unusual misunderstanding when she was serving for the match. A spectator mistakenly called a shot of Helen Wills out and both players shook hands believing the match to be over. The match umpire clarified that Wills shot was not out but was a winner. Wills broke Suzanne to level the set. However Suzanne went on to win the set and the match in straight sets.

Suzanne was the 1st ladies tennis player to turn professional. In 1927, she toured the USA and earned 100000$. To put the amount in perspective, Babe Ruth earned 70000$ that year.

Guess who was the biggest beneficiary of Suzanne turning professional? It was none other than Helen Wills who ended up winning as many as 19 Grand Slam singles titles.

At the French Open, the second biggest court, which has a capacity of around 11000, was built in 1994. In 1997, it was named the Suzanne Lenglen Court. The trophy awarded to the Ladies singles champion is called the La Coupe Suzanne Lenglen. 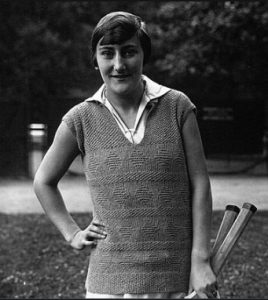 Simonne Mathieu was a female tennis player from France in the 1930s who won the French Open twice and was a losing finalist as many as six times. In fact her two wins came after 6 lost finals, which is a triumph to her tenacity. In 1938, she won her 1st ladies singles. That year she swept the singles, doubles and mixed doubles, to become only the second player to do so, after Suzanne Lenglen. Subsequently, Maureen Connoly and Margaret Court did so as well.

Her personal life is fascinating as well. She got married before 17 and was a mother immediately thereafter. She won the French Open girls title with her baby in a pram near the court. She was the mother of two kids by the time she was 20 but still had a successful tennis career.

During the second world war, Simonne was a leader of the French resistance and a group captain in the French Army. Her entry into war duty was dramatic. When World War 2 broke out, she was playing a tennis tournament in New York and quit the tournament to return to France. She offered her services to General de Gaulle and set up the Corps Feminin Francais, a group of French ladies volunteers serving in the French free forces. In August 1944, when Paris was liberated, she walked down the Champs Elysees alongside General de Gaulle.

In 2017, the third main court was named the Simonne Mathieu court by the French tennis federation.

These then are the heroic figures who have been immortalised by naming them after the main courts and stadium where the highly popular French Open is held every year. The French tennis Federation sure has chosen well.

SI Suspended For Asking Liquor On Duty In Bhadrak

Sentiment Behind Aatmanirbhar Bharat Is To Increase Our Exports: Gadkari