The three winners are – Rameez Mullick from Kolkatta, Chowde Gowda from Bangalore and Adib Javanmardi from Pune.

For the first time, a female GS rider team competed in the regional qualifier rounds and will also stand an opportunity to participate in the BMW Motorrad International GS Trophy 2022 challenge.

Mr. Vikram Pawah, President, BMW Group India said, “GS Trophy is a hallmark of competitive skills challenges, teamwork as well as some great riding. I would like to congratulate all the winners for showcasing exceptional endurance, riding skills and team spirit. To bring home the international GS trophy, these qualities are needed in abundance. Each member must push the envelope to contribute and strengthen the team’s ability for a winning performance. But more than the competition, more than anything else, do cherish this memorable experience. The whole BMW GS community and riding enthusiasts here in India will be following your progress closely. We wish ‘Team India’ best of luck. Go ahead and make life a ride!” 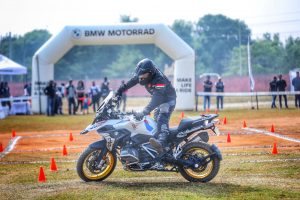 Team India will proudly represent the country at the BMW Motorrad International GS Trophy 2022 to be held in Albania. The team will be fully equipped by BMW Motorrad for the adventure ahead, flown to Albania and presented with a brand-new personalized BMW GS motorcycle for each rider for duration of the event. Team India will compete against other teams from Brazil, China, France, Germany, Japan, Latin America, Mexico, Netherlands, Russia, South Africa, South East Asia, South Korea, United Kingdom and United States of America.

About the International GS Trophy

The BMW Motorrad International GS Trophy is not a race but a team competition, pitching the GS-riding international contingent against each other in a series of challenges – and not all involve riding.

‘Explore the unexpected’ is the motto of the eighth edition of the BMW Motorrad International GS Trophy, which will take place in late summer 2022. Albania is considered an insider tip for off-road touring and is incredibly rich in flora, fauna and culture. The best Enduro riders in the world can look forward to discovering this quite unknown beauty on their GS bikes, in numerous special stages, and experience the #SpiritOfGS up close.

With the competitors camped nightly in a bivouac, the event also fosters a sense of brotherhood, sisterhood – and camaraderie. The successful team will be respectful of their environment, sympathetic to their machinery and understanding of team-mates.