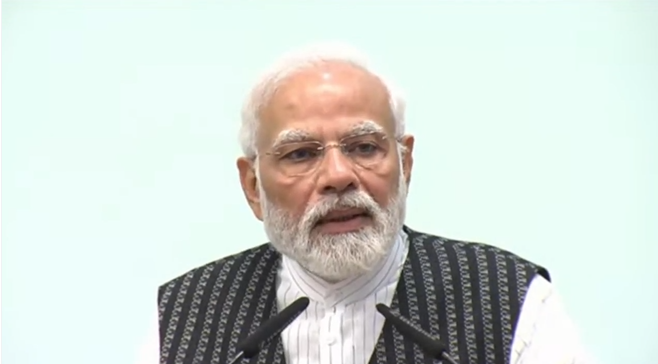 New Delhi: On the occasion of Teacher’s day, Prime Minister Narendra Modi interacted with the winners of the National Awards to Teachers in New Delhi.

Addressing the gathering, the Prime Minister paid homage to Sarvepalli Radhakrishnan. He also reminded the teachers that it is all the more important to be felicitated by the current President of India who is also a teacher and has taught in far-flung places of Odisha.

The Prime Minister highlighted the knowledge and dedication of teachers and pointed out that their biggest quality is a positive outlook that enables them to work with students relentlessly for their improvement. “The role of a teacher is to show the light to a person, and it is them who sow the dreams and teach them to turn the dreams into resolve”, he added. State and destiny of India of 2047, the Prime Minister said, is dependent on the students of today and their future is being shaped by the teachers of today, therefore “you are helping the students in shaping their lives and also giving form to the contours of the country”, he said. The Prime Minister said that when a teacher becomes associated with the dreams of the student, he achieves success in getting their respect and affection.

The Prime Minister also underlined the importance of removing conflict and contradictions in the various areas of the lives of the students. He said it is important that there is no conflict in what a student experiences in school, society and at home. He emphasised the need for an integrated approach by the teachers and partners with the families of the students to nurture the students. He also advised against having likes and dislikes for the students and treating every student equally.

The Prime Minister recalled his Independence Day proclamation of ‘Panch Pran’ and suggested that these Panch Prans may be discussed regularly in the schools so that their spirit is clear to the students. These resolutions are being appreciated as a way for the progress of the nation and we need to find a way to communicate them to the children and students, he said. The Prime Minister said, “There should be no student in the entire country who does not have a dream for 2047”. He said that there is a need to recreate the spirit that engulfed the nation during the years between Dandi Yatra and Quit India

Another 375 COVID-19 patients recover in Odisha