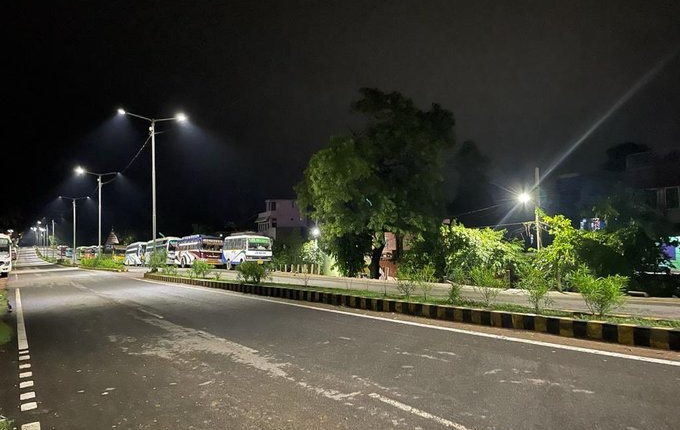 Tata Power works to mitigate impact of ‘Yaas’ in Odisha; normalcy in 2 days

Bhubaneswar/Balasore: Tata Power had identified the circles and divisions which were expected to be impacted by the severe cyclonic storm ‘Yaas’, well in advance. This has helped the power company to reinstate electricity in many parts of the network quickly, while working towards restoring power to the highly impacted locations across the state.

In order to access the on-ground network disruption and to restore power supply quickly, TPCODL and TPNODL mobilised over 13,000 workers at different sitesto ensure the quick restoration of power supply in the severely-affected areas. As the cyclone was due to affect the upper regions, TPWODL deployed 20 groups of workforce along with TPSDOL who also shared it resources to help out the teams in TPNODL.

TP Northern Odisha Distribution Ltd (TPNODL) has been severely impacted and an assessment of the damage is in progress while power restoration process has started in Balasore, Bhadrak, Jajpur, Kendrapatra town.TPNODL have been working round the clock to ensure power supply to COVID care centres and hospitals. The company deployed separate teams and set up a dedicated control room for them to closely monitor the situation.

The places that were projected to lie in the path of the cyclone were mostlytheNorthernand Central areas of Odisha along with the projected percentage of damage to the on-ground power infrastructure and network. Based on this probability of the damage to the assets, the company had strategised, planned and executed several operations on a war-footing in the vulnerable areas.

TPCODL undertook precautionary power cuts in some localities and the power restored on the evening of May 26th. Teams at TPCODL carried out regular checks through patrolling amongst the damaged areas. These teams worked in flooded conditions and managed to restore power in areas by taking utmost safety precautions in flooded areas of Rajkanika, Rajnagar& Mahakalpada, blocks. More than 80% power has been restored by TPCODL for its consumers. Quick restoration teams were formed within sub divisions and clear roles & responsibilities were defined to complete the restoration in the least time possible.The teams worked in difficult conditions which included areas submerged in water, roads blocked by trees.

Power supply to all hospitals, COVID Care Centres, ICU units and Oxygen Plants were provided within a record time of 2 Hrs. Power supply at all District HQ’s/CHC was also restored on a priority basis. Teams atTPCODL was able to restore 70% of the power supply within 8 hours of landfall. Additionally, TPCODL was able to maintain 100% power supply to the twin cities (Cuttack and Bhubaneshwar) due to clear focus area and systematic maintenance of the network.

As of today, more than 98 % of power is restored in TPCODL’s areas. Besides this, customers were sensitised on various pre-cyclone safety measures on its social media platforms. They were also encouraged to escalate complaints through mobile app and helpline number.

“We have full trust & confidence in our strategy as well as the entire team on the ground. We firmly believe that we will tide over of this challenge by meeting all the operational and safety requirements & will surely restore power supply at the earliest. We ensured 100% supply to Covid Hospitals and oxygen plants by installing double DG sets which was monitored bya technician round the clock. All five District Headquarters, Covid-19 hospitals and oxygen plants are being provided grid power now.

Power supply to key establishments in Balasore, Bhadrak, Jajpur and Kendrapatra towns too was restored quickly and was back to normal within 10 hours of the severe cyclone Yaas. Tata Power is working towards normalizing the system, and assessing and restoring infrastructure on a war footing at several locations. We are committed to provide reliable and 24X7 quality power to our consumers in Odisha,” said Mr Sanjay Banga, President – T&D, Tata Power.

Similarly, TPNODL allocated around 16,000 PSC & RS Joist poles, 375 transformers, 350 KM conductors of different sizes and ratings, 390 KM of AB cables and other safety materials at 159 strategic locations in North Odisha. The company also provided individual 33KV & 11KV feeders to the lineman & JE for patrolling which also helped them to identify the extent of damage & restoration and also assists the estimator for preparation on damage estimate.