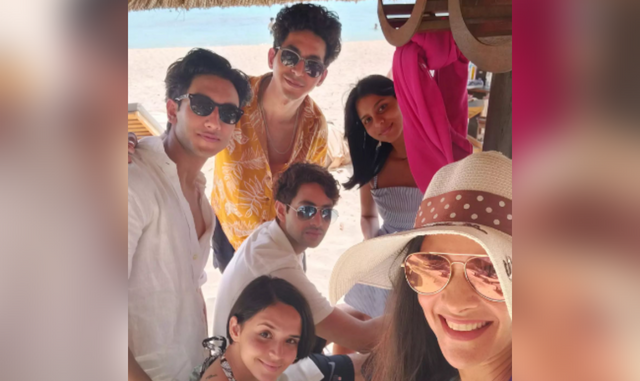 Sharing the picture she wrote: A v #HappyBirthday belatedly and lots of good wishes & love from us all #Agastya Archu Beta haaha … From making my acting debut with your Maamu @bachchan to now acting in a film with you (guess my role guys) it is a pleasure to be sharing screen space and working together, although mine is a small role so just for a little time. I’m so impressed by you and all the kids and cast and crew of the film. You good-naturedly making fun of me on set haaha, reminds me of Abhishek and your polite, gentle warmth and talent is endearing! Good luck with everything! Chalo now I am fully sounding like an Aunty so I better zip it! Here in the pic with lovely @suhanakhan2 @mihirahuja_ @vedangraina @santanaroach Missed the rest of the fab bunch in the pic. PS this is not on set, so not revealing anything. Was on s break day. #staysafe

The Archies is expected to release on Netflix in 2023 and is produced by Tiger Baby and Graphic India. It is based on the popular Archies Comics, and its teaser was released by Zoya Akhtar in May this year.

Cyclone Mandous likely to form over Bay of Bengal;…

BTS’ SUGA invites RM as the first guest to his…