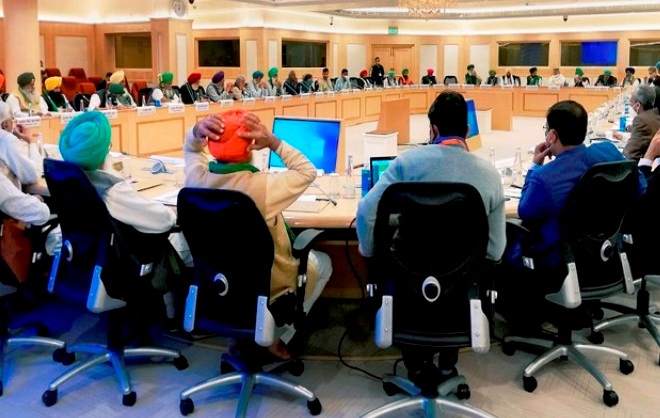 Talks Between Govt, Farmers Remain Inconclusive; Next Meeting On December 5

New Delhi: After almost seven and a half hours, the fourth round of talks between farmers and the Centre ended inconclusively and the next round of meeting is scheduled on December 5.

The farmers have given their suggestions to the government in writing and seemed firm on their demand of complete rollback of the farm laws.

“Government will contemplate about seeing that APMC is further strengthened & its usage increases. New laws lay down provision for private mandis outside purview of APMC. So, we’ll also contemplate about having an equal tax for private as well as mandis under AMPC Act,” said Agriculture Minister Narendra Tomar after the meeting.

Union Agriculture Minister Narendra Tomar, who led the negotiations, said the government “has no ego”.

“We will ask the government tomorrow (Friday) whether they will scrap the law and if they refuse, we may not attend the December 5 meeting,” said Jagmohan Singh, the general secretary of Bharatiya Kisan Union (Dakaunda). Farmers, who had refused to accept food, tea and even water from the government, said they will take a final decision at a meeting on Friday.