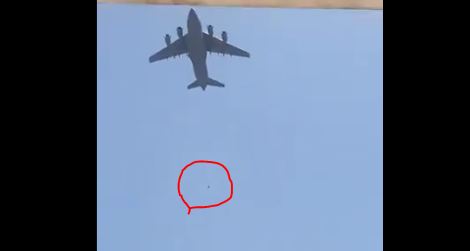 Taliban In Kabul: Two People Tie Themselves To Wheels Of Aircraft, Fall To Death

Kabul: Two people who had tied themselves to the wheels of an aircraft flying from Kabul fell down to death, according to a video shared on Twitter by Tehran Times.

According to reports, three young men who were holding themselves tightly onto the tires of an airplane fell on top of people’s houses.

The incident happened after thousands of Afghans gathered at the Kabul airport to seek an evacuation flight amid the Taliban’s takeover of the country.

DISCLAIMER: DISTURBING FOOTAGE❗️❗️❗️
Two people who tied themselves to the wheels of an aircraft flying from Kabul, tragically fall down. pic.twitter.com/Gr3qwGLrFn

The bloodied bodies of the deceased were lying on the ground just outside the terminal building, reports said adding that at least five people were killed amid reports of heavy gunfire at the Kabul airport.

In other recent development, over 60 countries including the US, United Kingdom, Japan, Germany, and Canada on Sunday (local time) urged “all parties” to safeguard the departure of foreign nationals and Afghans who wish to leave the war-torn country, and said that roads, airports, and border crossing must remain open.

Afghanistan’s government has collapsed with President Ashraf Ghani leaving the country and the Taliban’s entry into the capital.

Know Why Mouli Ganguli Was Rejected For Shows