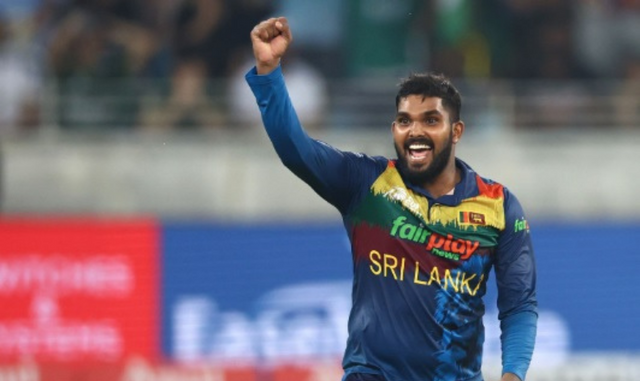 Wanindu Hasaranga was the leading wicket taker at last year’s T20 World Cup and the Sri Lanka all-rounder is on track to match those efforts following an impressive three-wicket haul and Player of the Match performance against Afghanistan at The Gabba.

The Sri Lanka star claimed the key wicket of Usman Ghani (27) early and then returned at the death to pick up the scalps of fellow spinners Rashid Khan (9) and Mujeeb Ur Rahman (1) as Afghanistan could muster just 144/8 from their 20 overs.

Ghani and Rahmanullah Gurbaz (28) had given Afghanistan a strong start by putting on 42 for the opening wicket, until Hasaranga’s timely intervention following the batting Powerplay.

Hasaranga finished with a match-winning figures of 3/13 and even chimed in with an excellent catch in the outfield to help dismiss the dangerous Najibullah Zadran (18).

Mujeeb produced a moment of brilliance when he clean bowled Pathum Nissanka for 10 early in Sri Lanka’s reply with a delivery that had to be seen to be believed.

Mujeeb (2/24) got his usual drift in towards the pads, before the ball spun away from the bat and slammed into the top of off stump to leave Nissanka stunned and give Afghanistan some hope.

The Afghanistan leggie bowled well to finish with figures of 2/24, but even star tweaker Rashid (2/31) copped some stick as Dhananjaya de Silva (66*) crafted a brilliant half-century to guide Sri Lanka home.

Gulbadin Naib would have been on a high entering Tuesday’s match after getting a late call-up for injured opener Hazratullah Zazai, but the veteran batter won’t want to see a replay of his comical dismissal.

Naib had moved on nicely to 12 and was just starting to feel at ease at the crease until disaster struck in the 18th over when he attempted to sneak a second run and dropped his bat mid-pitch when sent back by skipper Mohammad Nabi.

The Afghanistan veteran tried in vain to recover safely – even attempting an eye-catching roll towards the crease – but was caught short much to the delight of the Sri Lanka players.

The victory sees Sri Lanka stay in contention for an unlikely semi-final berth, although they will need everything to go right for them if they are to finish in the top two in Group 1.

Dasun Shanaka’s side rise to third in the Group 1 standings and will need to defeat England on Saturday – and have other results go their way – to have any chance of sneaking in.

Afghanistan’s frustrating tournament is over, with Friday’s clash against hosts Australia now their final chance to earn a victory at the T20 World Cup.