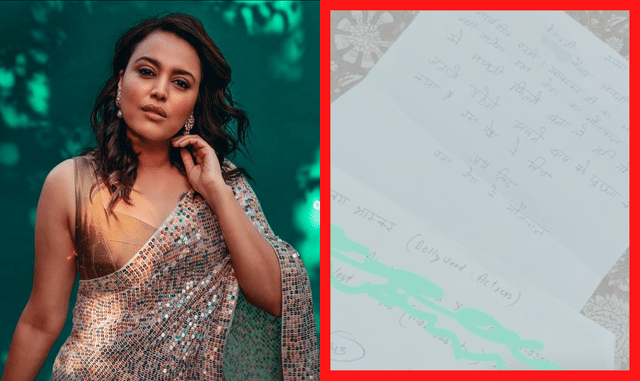 Bollywood Actress Swara Bhasker has reportedly received death threat through an anonymous letter and Mumbai Police have started a probe into the matter following a complaint by the actress.

After Salman Khan, now Swara Bhasker has received a death threat through an anonymous letter via speed post at her residence located in Versova, Mumbai. Following this, the Mumbai police have launched an investigation, an official said on Wednesday.

On the basis of a complaint lodged by actress Swara Bhasker, Versova police registered a non-cognisable offence against unidentified persons and launched an investigation, the official added.

The handwritten letter in Hindi directly threatened Swara’s life and was also filled with abuses warning her against insulting Savarkar. The letter was signed in the end as ‘Is desh ke naujawan’. The letter mentions that the youth of the country will not tolerate the insult of Veer Savarkar, reports added.