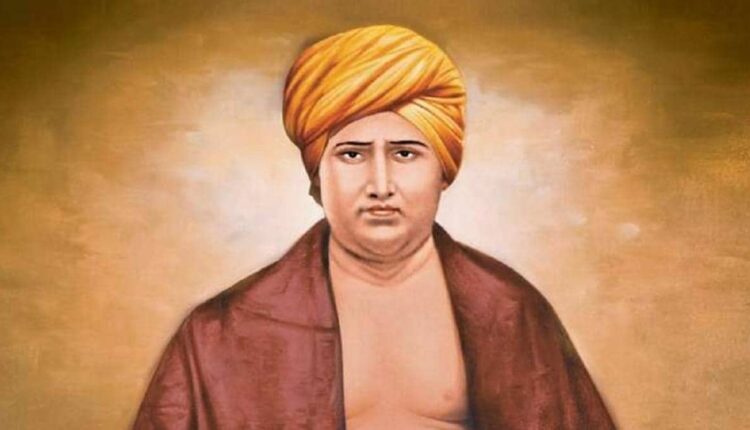 New Delhi: Today is the birth anniversary of Swami Dayanand Saraswati, the founder of Arya Samaj. He is remembered with reverence and affection among the social-reformers of the nineteenth century.

Swami Dayanand born as Mool Shankar Tiwari on February 12, 1824, in Gujarat, Dayanand Saraswati inspired generations by reviving Vedic ideologies. He was named Mool because he was born when the Mool Nakshatra prevailed. Swami Dayanand Saraswati was a renowned scholar who promoted the Vedic philosophy and principles of karma and reincarnation. His mission in life was universal brotherhood and for this, he founded the Arya Samaj.

He promoted the right to education, advocated the principles of Karma and rebirths but detested superstitious beliefs. His call for Swaraj (self-rule) is believed to have inspired India’s freedom fighters, and therefore, he is also referred to as one of the ‘Makers of Modern India’.

The Arya Samaj opposes idol worship, caste system based on birth rather than on merit, untouchability, child marriage, pilgrimages, priesthood, and temple offerings. Social reform and education were a big part of Swami Dayanand Saraswati’s ideas.

God has neither form nor colour. He is incorporeal and immense. Whatever is seen in the world describes his greatness.

God is absolutely holy and wise. His nature, attributes, and power are all holy. He is omnipresent, incorporeal, unborn, immense, omniscient, omnipotent, merciful, and just. He is the maker, protector, and destroyer of worlds.

Prayer in any form is efficacious because it is an action. It will, therefore, have a result. That is the law of this universe in which we find ourselves.

Salvation is the state of emancipation from the endurance of pain and subjection to birth and death, and of the life of liberty and happiness in the immensity of God.

In life, the loss is inevitable. Everyone knows this, yet in the core of most people it remains deeply denied – ‘This should not happen to me.’ It is for this reason that loss is the most difficult challenge one has to face as a human being.