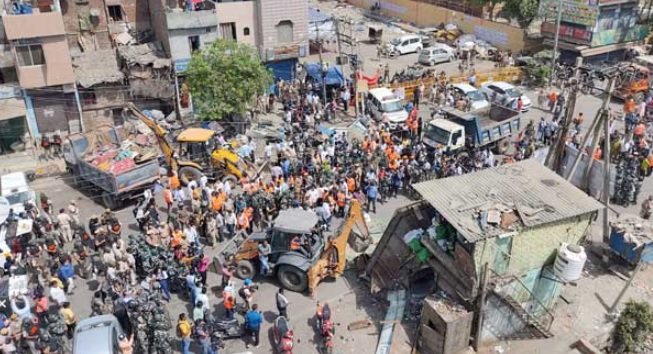 New Delhi: The Supreme Court on Wednesday ordered status quo, stopping the demolition drive by the North Delhi Municipal Corporation in Northwest Delhi’s Jahangirpuri, where communal clashes broke out on the occasion of Hanuman Jayanti.

“Okay, we order status quo. Let the matter be taken up tomorrow [Thursday] along with the other matter,” Chief Justice of India N V Ramana said.

Dave called the demolition drive completely illegal demolition as no notice was given to anyone and nobody was heard. “We have moved an application.”

The North Delhi Municipal Corporation, ruled by the BJP, scheduled a demotion drive in the Jahangirpuri area on Wednesday and Thursday. The civic body sought 400 police personnel from the Delhi Police for the drive.

In preparation of the demotion drive, heavy police and paramilitary forces were deployed in Jahangirpuri since Wednesday morning.

A total of 12 companies (around 1,250 jawans) of the CRPF have been deployed in the city in two shifts, most in and around Jahangirpuri.

On Tuesday, in its order remanding two men to police custody for two days in connection with the Jahangirpuri clashes, a Delhi court asked the police to ensure the investigation was carried out in the fairest manner.