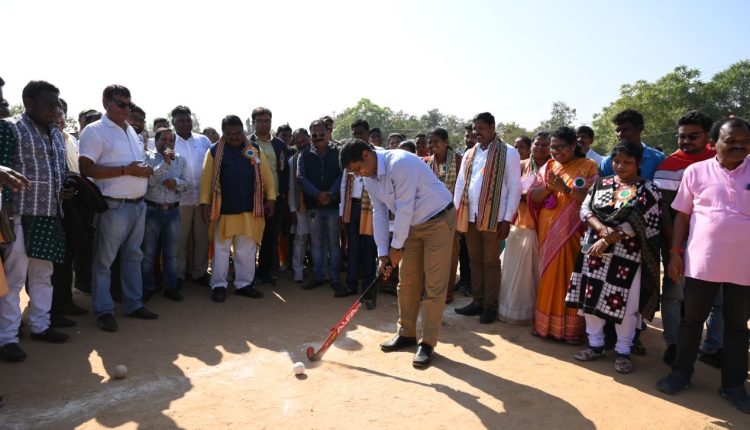 Sundargarh: With a little over a month to go for the FIH Odisha Men’s Hockey World Cup tournament in January 2023, Sundargarh district, which is co-hosting the biggest hockey carnival in the world, has plunged into a celebratory mood.

The celebrations were kicked off from Saunamara village, in Balisankara block, which has made invaluable contributions to Indian hockey, with the inauguration of a district-level sports and cultural competition in a ‘Kick Off ‘ceremony on Tuesday.

Following the inaugural function, hockey and football tournaments were flagged off in 279 Gram Panchayats across the 17 blocks in the district. Over 800 hockey and more than 1,100 football teams have registered for the district-level competitions.

Hockey India President and son of the soil, Padma Shri Dr. Dilip Tirkey, and daughter of the soil, Subhadra Pradhan who capped the Indian Women’s Hockey Team, were felicitated on the occasion.

“Our Sundargarh district is going to host the World Cup Hockey for the first time for which the largest hockey stadium in the country is being built at Rourkela. This will help Sundargarh get a new global recognition. Moreover, the laying of synthetic turf grounds in various blocks will help groom and promote talents from rural areas,” Shri Oram said. 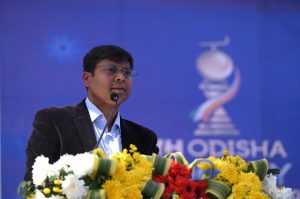 “I owe all the recognition and fame I have achieved in my life to my village Saunamara where I was born. The village ground nurtured me in getting a berth in the national team. Many players from villages across the district, along with Saunamara, have brought laurels to Sundargarh,” said Dr. Tirkey while speaking after the felicitation.

“Various programmes are being organized all over the district to accord a grand welcome to the Hockey World Cup. A number of programmes are slated to be held in schools and colleges along with hockey and football tournaments in rural as well as urban areas. The Administration is leaving no stones unturned to make the grand event attractive and unforgettable,” said Collector Dr. Parag Harshad Gavali while appealing all citizens to join the celebrations.

A special documentary on Saunamara village, better known as the ‘Hockey Village’, and folk dance performance by locals was presented on the sidelines of the district-level sports and cultural event. Friendly hockey matches in men’s and women’s category were organized on the occasion. 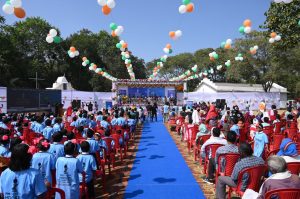 The administration has scheduled a series of school and college-level competitions in badminton, volleyball, Kabaddi, kho kho, hockey and football with an objective of building up the sports tempo in the district in the build for the marquee event. Moreover, a string of events are also scheduled for development of creativity among students.

Various folk dance and music troupes in the tribal dominated district will also be roped into the celebrations through thematic programmes in the run up to the Hockey World Cup.