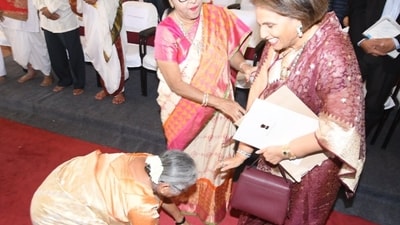 Bengaluru: A debate has erupted on social media on respecting royal culture decades after the end of monarchy. It all began with a Twitter post showing a worksheet for a child’s homework. “I ____ to the king,” a sentence read, with ‘bow’ in the options.

A concerned father then went on, writing, “Homework sheet for my kid! Schools should be little careful with such undemocratic teachings (might seem small mistake).. they might inculcate wrong values in minds of kids.”

Responding to this, a Twitter user posted a picture of author Sudha Murthy bowing before a Mysuru royal.

“Look at Sudha Murthy bowing before a member of the Mysore royal family. She is supposed to be a role model,” a Twitter user wrote.

The cyberspace was divided in its opinion of whether royals still deserve the respect of common folk. However, many defended Murthy’s act, with a user called Varun saying, “That’s our culture. Keyboard Leli journalists won’t understand. Irrespective of age, stature, position everyone bows to Rajamatha. Her culture has taught her this.”

While, another posted, “Slavery is deeply rooted.”

“Why do Dalit activists seethe at Mysore Wodeyars?” A user with the handle ‘Ram Bhaktha’ asked, to which Vinay K S responded, “What’s your point? that its ok to bow/prostrate before royals?”

“That’s her personal choice, did she ask you to prostrate before anybody?” another reply read.

“People of old Mysore State always have huge respect towards the Royal family. Bowing to the Queen is a normal practice,” a netizen called Subbu Iyer educated. Meanwhile, another simply said, “Feudal elites!”