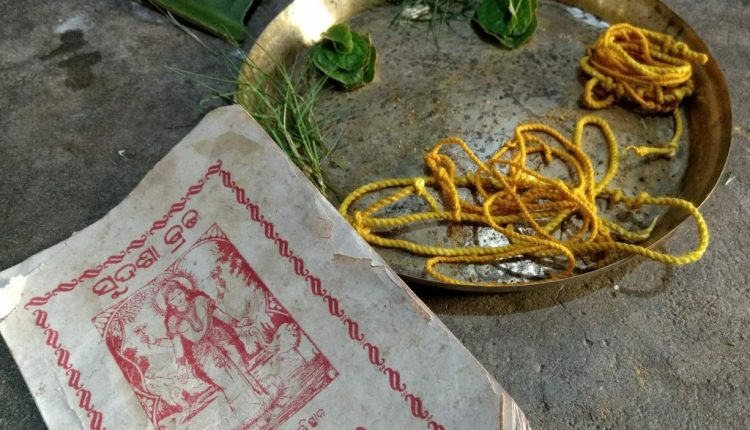 Bhubaneswar: Sudasha Brata, or Sudasa Vrata, is a unique ritual observed in Odisha. When there is a rare combination of Shukla Paksha (waxing phase of moon), Thursday and Dashami in Oriya Calendar Sudasha Brata is observed. Sudasa Brata is dedicated to Goddess Lakshmi.

Sudasha Brata is observed mainly by women for the wellbeing of the family. The main ritual involves the tying of a sacred thread on the hand by women.

The thread is only replaced during the next Sudasa Vrata.

Ten knots are made in the thread, chanting 10 different names of Maa Lakshmi. The woman holds the thread by hand until the next Sudasha brata when it is replaced with a new one.

Special food items like Manda Pithas are offered to Goddess Lakshmi on the day.

Another Sudasha Vrat that is part of the culture of Eastern India is observed during the Dasami day in the Shukla Paksha of Bhadra month by some communities.

The married women in Odisha observe Sudasha Brata on the holy date of Shukla Paksha (waxing phase of moon), Thursday and Dasami. On this day, the married women of the households keep fast the entire day and worship the goddess Laxmi, the epitome of wealth, praying for the well-being and prosperity of the members of the family.

The sacred thread or the brata is the most important aspect of the ritual. The brata, after it is dipped in the ritualistic turmeric water is tied on their right arm of the women. Before tying the brata, ten knots, are made on the thread while uttering the ten different names of Goddess Lakshmi. As a part of the ritual, the sacred brata is to be kept tied on the right arm of the women till the next Sudasha Brata. After which the brata is replaced with a new one.

Preparation of the Puja

Legends believe that Goddess Lakshmi resides in the houses where cleanliness prevails, hence the night before the puja, the entire house is properly cleaned and a solution of dung water for the sake of purification is sprinkled throughout the house. After it dries, women draw colourful chittas and jhotis (a watery mixture prepared with rice grains) all the way from the entrance of the house.

The next morning, the rituals start before the sunrise, preferably during the Brahma Muhurta. The idol of Goddess Lakshmi is placed over a small wooden pedestal. A kalash filled with water is kept over dhanas (grains of paddy). A mango twig with ten leaves cleaned thoroughly is placed atop the kalash.

Historical Belief of the Puja
According to folklore, Sudasha Brata has been in practice by women since the Satya Yuga. The wife of King Vikramasena, Queen Ratnabati and Minister Trikuteswar’s wife, Padmabati, while wandering together saw a group of Apsaras performing the rituals of Sudasha Brata. Out of curiosity they enquired about its significance from them.

Without wasting much of their time, the Apsaras explained the duo about the importance of the puja to the duo and the rituals about how they invoked Goddess Laxmi for prosperity, wealth and well-being. Ratnabati and Padmabati made up their minds to observe the rituals on the auspicious date of Shukla Paksha, Thursday and Dasami.

Once Ratnabati found her sacred brata nowhere in sight. Trikuteswar approached the queen for an old brata after seeing his wife worried and not having food for three consecutive days. After much reluctance, she gave up on the king’s command. Not much after the incident, the king lost his kingdom and was forced to beg to make a living. The couple took up meagre jobs at a merchant’s house.

A Tradition of Sincere Devotion

While the puja is celebrated with festive aura, it may not be possible for every household to celebrate it in a grand manner. Odias who leave in foreign nations or are unable to complete their pujas due to unavailability of the puja materials, can pray with sincere devotion to Goddess Lakshmi for prosperity as faith and sincerity are the main focus of the rituals.