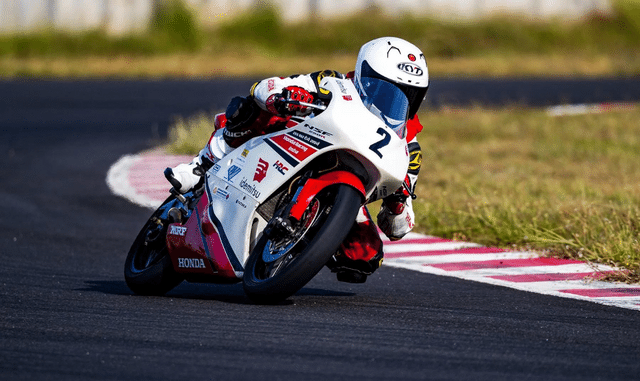 The IDEMITSU Honda SK 69 Racing team’s Rajiv Sethu led Honda’s charge. PS165 cc class of championship. While the morning qualifier had put Rajiv Sethu 5th on the race grid, the afternoon race saw him back on the track fully charged up vying to earn valuable points for the team. Starting the race fearlessly, he gave tough competition to other riders and maintained his steady performance until the last lap. Making the most of drama filled race, Rajiv lapped back home at 3rd position thus earning 15 points for the team. While his teammate Senthil Kumar managed to finish 8th despite the technical issue in the machine.

Speaking on the inaugural round of the 2022 season, Mr. Prabhu Nagaraj – Operating Officer, Brand & Communication, Honda Motorcycle & Scooter India. Pvt. Ltd. said, “We have started the 2022 season with the high spirits. Today, we saw strong performances by our young as well as experienced riders. Despite the slow start in the qualifying, Rajiv has brought a podium for us in Pro-Stock 165cc category of national championship. Our young riders from IDEMITSU Honda India Talent Cup impressed us with their stellar performances. Sarthak with his international exposure displayed his racing prowess and won the NSF250R race. On the other side, Raheesh Khatri and Siddesh Sawant fought with full power in the CBR150R. Our new platform, Honda Hornet 2.0 One Make Race further gave the opportunity to the racing enthusiasts and saw exciting moments from our customers while enjoying and learning new skills and techniques. As all the riders are geared and motivated, we are set for better results tomorrow.”

11 millennial riders of the IDEMITSU Honda India Talent Cup NSF250R today displayed utmost confidence and rode with confidence on the racetrack. With prior experience of riding the Moto3 machine NSF250R both on national and international circuits, Sarthak Chavan recorded the fastest ever lap of 1:12.785 of the Kari Motor Speedway. Motivated by his morning performance, the Pune boy lead the race 1 from start to finish. Clocking total time of 12:24.392. He was followed back home by Chennai’s Shyam Babu at 12:40.808. At the third spot was AS James from Bengaluru. While Velachery’s Mohsin P recorded the best lap of 1:32.210 in the race but he unfortunately crashed in lap 4.

The race 1 of CBR150R category witnessed a two-way racing action between Raheesh Khatri and the pole starter Siddesh Sawant till the chequered flag. Starting 7th on the grid, Raheesh Khatri quickly steered his way to first position in the start itself. From thereon, the youngest rider maintained his calm till the end and secured his maiden win with a timing of 14:46.340. Keeping the fight on, Kolhapur’s Siddesh Sawant managed to overtake Raheesh in last lap but settled for 2nd, merely 0.068 seconds behind Raheesh. Siddesh recorded the best lap of 1:27.227 in today’s race. Rounding up the podium was the Chennai lad Shyam Babu who took total time of 15:06.707. Today turned out to be an unfortunate day for Harshit Bogar as he could not start the race due to crash in formation lap whereas the rookies Beedani Rajendera & Pothu Vignesh crashed out after 5 laps.

Honda Hornet 2.0 One Make Race – a platform introduced by Honda Motorcycle & Scooter India last year for racing enthusiasts and its customers, today saw multiple changes on scoreboard for top 3 positions. Quickly moving up from 5th position start to 1st position in Lap 1, G Balaji was held in a neck-to-neck fight with Ullas Santrupt. Though Ullas regained his top position and pushed back Balaji on second, it was Romario’s quick move in lap 6 which resulted in him taking the charge. From lap 7 onwards, the battle continued till last lap. It was Ullas Santrupt who ultimately finished the race on first position recording best lap of 1:28.955, followed by G Balalji on second and Romario on third.