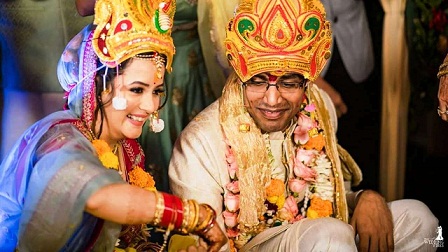 Biswa shared pictures with wife Sulagna from their wedding and reception. In one picture, the couple is all smiles, while in the other Biswa has a funny expression. He captioned it as, “Biswa Married Aadmi. @sulagna03 (sic).”

The comedian is known for appearing as a judge on the Amazon Prime Video reality show Comicstaan. He also created the Amazon original series Laakhon Mein Ek, which has aired two seasons. Sulagna, meanwhile, is known for having appeared in Murder 2. She has also appeared in films such as Ishq Wala Love, Isai, Guru Dakshina, and Raid, and the TV shows Amber Dhara, Do Saheliyaan, and Bidaai.