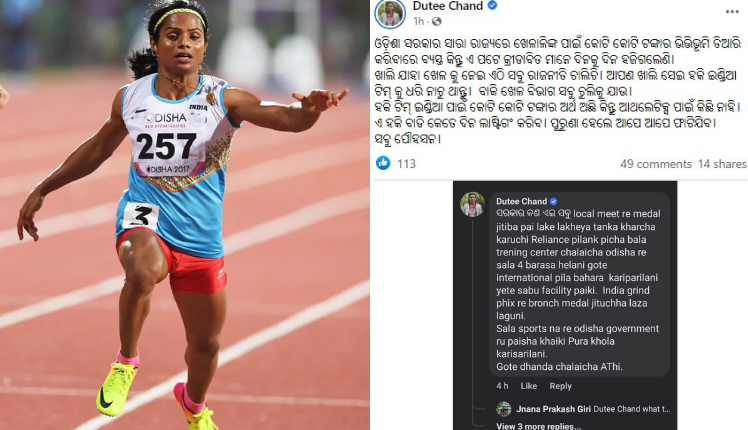 Bhubaneswar: Odia sprinter Dutee Chand is once again in controversy. Recently she was entangled in trouble for slamming the Odisha government.

Taking to her Facebook account, she accused the state government of failing to create good athletes in Odisha. She also hit out at the ruling BJD for giving emphasis to hockey and spending lakhs of money on the players.

However, such kind of slamming did not go well on social media. Netizens including eminent personalities have started trolling her. It seems like Dutee enjoys remaining in news through controversies.

Meanwhile, after facing wrath from netizens and other intellectuals, Dutee had deleted her post.

She has used a lot of fealty slang in Odia while writing a post. In her post, there are several spelling mistakes and wrong words which signifies Dutee’s poor intellectuality even after being an international level player.

“Odisha government is spending a lot of money by making infrastructure for Hockey. The state government is looting money in the name of sports but not doing anything good for the athletes. The government has failed to create a single international player in the last four years. You (state government) are only standing for the support of Hockey India while neglecting other sports. There are crores of rupees with you for Hockey but nothing for athletics,” Dutee said in her FB post.

As a sports person I strongly condemn this kind of statement from another sportsman who herself belongs to Odisha.Odisha Government has always given importance to all sports be it Hockey or be it athletics. pic.twitter.com/Qrpfgh4GEz

Bagging medal in Olympic is not everyone’s cup of tea. Why Bhubaneswar (Odisha) is known as the sports capital of India that everyone knows very well.

“As a sports person, I strongly condemn this kind of statement from another sportsman who herself belongs to Odisha. Odisha Government has always given importance to all sports be it Hockey or be it athletics,” Tirkey said.

“Bagging medal in Olympic is not everyone’s cup of tea. Why Bhubaneswar (Odisha) is known as the sports capital of India that everyone knows very well. And if people really don’t know then they should know that Hockey is the game which has given recognition to India at the International level. This comment is unparliamentary and discouraging for fellow athletes. And lastly being a player one should learn to give respect to other players,” he added in his series of tweets.

Recently, Chand failed to qualify for the semifinals of the women’s 60m run in the World Indoor Athletics Championships after finishing sixth in her heat here on March 18.

Dutee clocked 7.35 seconds to finish sixth in the sixth heat. She was ranked 30th overall out of 46 participants.