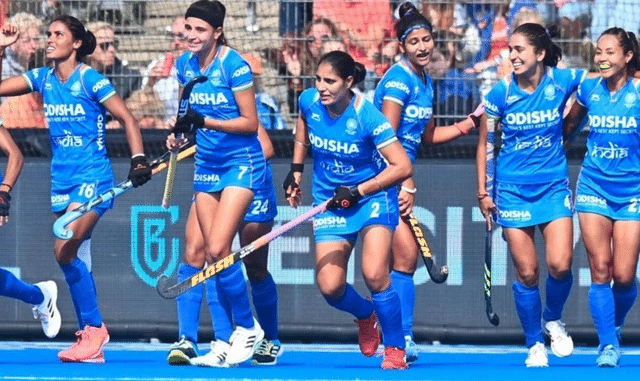 Amstelveen (Netherlands): The Indian Women’s Hockey Team and England lived up to the billing as they produced a high-voltage campaign opener in their Pool B match here at the prestigious FIH Women’s Hockey World Cup Spain and Netherlands in the packed Wenger Hockey Stadium, Amstelveen on Sunday. Goals were scored by Isabelle Petter (9′) and Vandana Katariya (28′) as they helped their respective teams add on a crucial point on the pool table.

Both teams got off to a rollicking start pushing each other for ball possession and creating space in each other’s circle. England drew the first blood when their striker took a fierce shot on goal but an alert Savita averted early danger with a diving save only minutes into the first quarter. But England were successful in their second attempt when their experienced player Lily Owsley with a total of 182 international caps, set up Isabelle Petter with a fine assist. Petter sent the ball high, pocketing the top of the net to fetch England that much-needed 1-0 lead in the 9th minute to put pressure on India.

Determined to stay on-par with England in the game, India kept their calm and worked on their strategy to create chances in the circle. They were awarded a PC in the following minutes, but missed the goal by a margin as Gurjit Kaur’s dragflick bounced off the goal post. Despite missing out on a goal, India remained patient in their approach, building on a good structure and when they were awarded a PC for foot-foul in the 28th minute, experienced striker Vandana Katariya picked up a splendid rebound off England goalie Maddie Hinge’s pads after Monika had taken a shot from the PC.  She deflected the ball perfectly past Hinge to earn India the equaliser and keep the game open in the second half of the match.

Coming back from the ten-minute break, feeling pumped up India upped the pressure on England with potent attacks. They played with speed, and dominated the ball possession but England’s defence was rock solid with their experienced custodian Maddie Hinge up to the challenge, making some fine saves and guiding her team’s defence from the back.

With no goals scored in the third quarter, the match went down to the wire as both teams fought hard for that elusive lead. Though England created a couple of chances in the D with shots on goal, they were off target on most occasions. India could have extended the lead in the 56th minute when Neha and Navjot worked inside the D to help Sharmila find a deflection. But Sharmila unfortunately could not get her stick on the ball, thus missing out on a great opportunity. With less than four minutes for the final hooter, the game continued to remain tense when Monika won India’s seventh PC of the match. However, the team couldn’t make much out of the chance with a slow execution of the PC battery and once again England putting up a fine PC defence with Hinge leading the charge.  A good video referral by India in the following minute ensured England were denied a PC. The next few seconds, England dominated the ball but couldn’t make much of it, ending the match in a draw.

Earlier in the day, China drew 2-2 against New Zealand in the pool B match, keeping the pool open.

On 5th July, India will take on China in their second pool B match at 2000 hrs IST.  Please note, the matches will be live on Star Sports 1 and streamed on Disney+ Hotstar