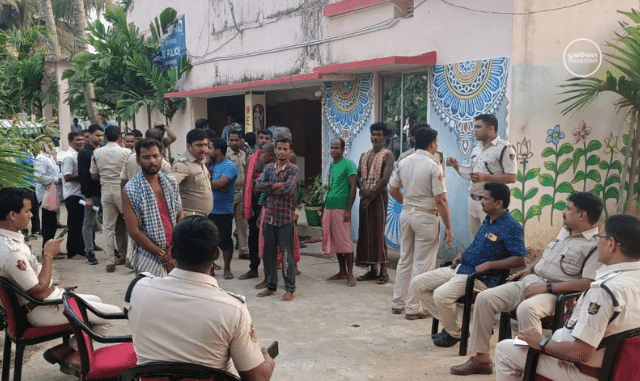 Balipatna: Police on Saturday arrested 24 persons from Rajas village on the outskirts of Bhubaneswar on charges of attacking the personnel of a Special Squad of Commissionerate Police during a raid at a gambling match near Krushnapur Jatra ground last night.

According to sources, the Commissionerate Police had received a tip-off about gambling activity near the Krushnapur Jatra ground in Rajas Panchayat within Balipatna police station limits.

At around 1.30 pm, a 17-member Special Squad, dressed in plain clothes and without any prior information to the Balipatna police, raided the on motorcycles and a police van.

If sources are to be believed, the cops first led a lathi-charge and then detained some gamblers in the police van. In the meanwhile, some locals and some inebriated gamblers attacked on-duty police officers with sticks and soon the spot turned into a battlefield.

Though the cops warned them of strict consequences, the mob overpowered the policemen by pelting stones. Outnumbered by the mob and unable to withstand the attack, the cops fell back and returned empty-handed. They also left the scene leaving the police van and two motorcycles behind, sources added.

On hearing the news, Balipatna police rushed to the spot and brought the stranded police vehicles with the help of the local Sarpanch.

Taking the matter seriously, Commissionerate Police today morning arrested 24 persons from Rajas village in connection with the attack on personnel of the Special Squad.

According to Balipatna police, all the arrested persons have been forwarded to the court in Case No. 131/2022 this evening. The number of arrests is expected to rise further, the police said,