Bhubaneswar: Odisha Chief Minister Naveen Patnaik on Wednesday announced that a special Act will be formulated for Lingaraj Temple in Bhubaneswar on the lines of Puri Srimandir. 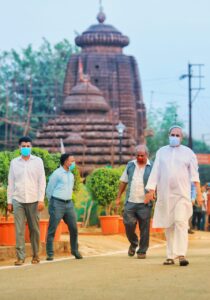 Patnaik also expressed gratitude to people who have donated their lands for the heritage development project around the ancient shrine.

The Odisha CM during his conversation with the sevayats (servitors) of Lingaraj Temple here this afternoon said the development activity has been carried out through Bindu Sagar and Old Bhubaneswar and added that this has been possible due to the cooperation of sevayats.

Patnaik went round Devi Padahara pond and reviewed the work progress at Bindu Sagar Mutt ghat. He expressed satisfaction that such project work will boost tourism.

Worthwhile to mention here that the project work of Ekamra Kshetra  is being implemented through CM’s 5T programme. The main objective of the ongoing project is to develop the heritage city Bhubaneswar’s image in the world forum and attract more devotees and tourists to this divine land.