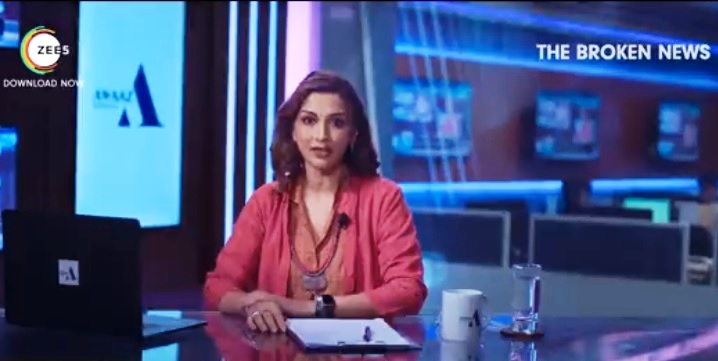 Currently, Sonali Bendre is seen as a judge on Zee TV’s DID Little Masters alongside Mouni Roy and Remo D’Souza. The actress made her digital debut with The Broken News, where she plays journalist Amina Qureshi.

Sonali Bendre said, “I couldn’t have asked for a better introduction on OTT platforms than with ‘The Broken News’ on ZEE5. I connected with the concept as soon as I heard it as It’s so relevant for the times we’re living in. The entire crew and my amazing co-stars Jaideep and Shriya made my return to acting such an amazing experience. I’m so excited to share what we’ve created.”

Zee5 has joined hands with BBC Studios India for The Broken News directed by Vinay Waikul. The series unearthing the realities of TV news journalism is an adaptation of the popular British series Press.

The plot of the series features two rival news channels based in Mumbai – Awaaz Bharati, an independent and ethical news channel, and Josh 24/7 News, which offers sensational and invasive journalism, and what transpires between the main characters in their quest for news.

The original UK series, Press, was created and written by Mike Bartlett of Doctor Foster and King Charles III fame. It was a Lookout Point, BBC Studios and Deep Indigo production, co-produced by Masterpiece. It aired on both BBC One in the UK and on PBS Masterpiece in the US in 2018, with the original series set in a print newsroom rather than a TV newsroom.

The Broken News’ will premiere on 10th June in Hindi, Tamil, Telugu, and Kannada and will be accessible across 190+ countries only on ZEE5.