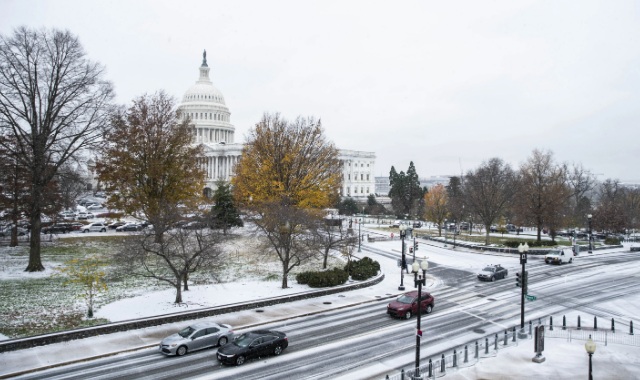 Snowy Blast In US

Washington: A winter storm rolled over D.C., Maryland and Virginia on Wednesday, bringing the first significant snowfall of the season.

A winter storm warning is in place for much of the East Coast of the United States. America’s east coast is about to be hit by what could be the biggest winter storm for years, with 50 million people in the path of the snow.

Up to two feet (60cm) of snow is expected to fall along the eastern seaboard, stretching from North Carolina up through New England in the north east.

The weather service posted winter storm warnings, watches and advisories all the way from Cape Cod, Massachusetts, down to northeastern Georgia, a distance of more than 850 miles. More than 70 million people were under a winter storm warning or advisory.

Near-blizzard conditions are expected to slam into New York on Wednesday evening, in the biggest storm to hit the city since January 2016.

Up to two feet of snow are being forecast for inland areas in Pennsylvania, New York State, and much of Connecticut, Rhode Island and Massachusetts.

The cities of Washington DC and Philadelphia will be sitting right on the dividing line between precipitation types, making for a messy mix of snow, sleet, freezing rain and possibly, cold rain as the storm intensifies and moves along the East Coast.

People are being told to avoid all but essential travel.

Airlines have cancelled 700 flights and delayed almost 400 due to the impending storm.

It is likely to be the first major storm of the season, which tends to last until around March, threatening the region with disruption for months.