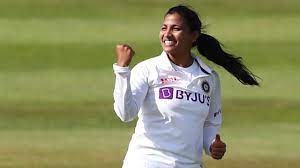 New Delhi: Sneh Rana on Saturday became the first player from the Indian women’s cricket team to score more than 50 runs and take a four-wicket haul in an innings on debut.

After getting bowled out for 231 runs in their first-innings, Indian batswomen managed to score past England’s lead in the second innings. They took a 179-run lead in the match while chasing England’s score of 396 runs.

Shafali Verma was the star with the bat while Sneh Rana has impressed with her all-round show.

fter figures of 4/131, Rana scored a half-century in India’s second innings. She is remained unbeaten on 80 and strung together an important partnership with Taniya Bhatia.

The one-off women’s Test between India and England ended in a draw on the final day, with the visitors defying the home side attack to score 344 for 8 in their second innings after following on.

Rana top-scored in the second innings with 80 not out off 154 balls. Rana and number 10 Taniya Bhatia (44 not out) shared 144 runs for the unbroken ninth wicket as they frustrated England bowlers for 30.4 overs.

Odisha: Pass Percentage To Be Over 90% Due To Latest CHSE Plus II Evaluation Criteria