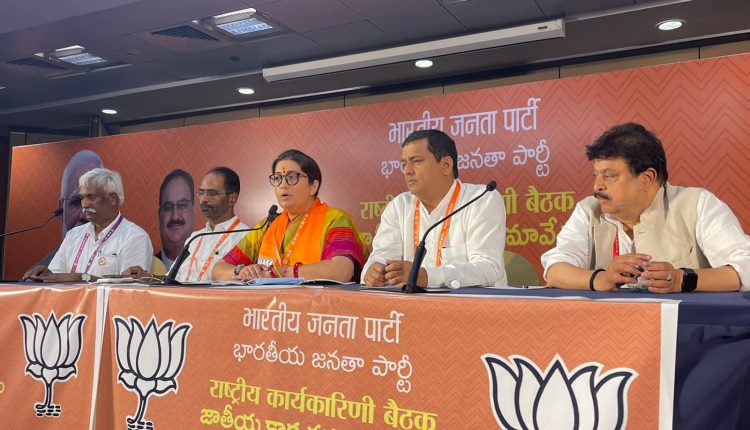 Hyderabad: Union Minister Smriti Irani came down heavily on Telangana Chief Minister K Chandrashekar Rao for not receiving Prime Minister Narendra Modi on his arrival at the airport in Hyderabad.

“Telangana CM KCR just not insulted an individual but also an institution. He jeopardised the integrity of the constitution. Politics may be a circus for KCR’s party, but for BJP workers it is a medium for social emancipation and nation-building,” Irani said during a press conference here.

Further attacking the TRS government, Irani said that it was a party “steeped into corruption” and engaged in “dynastic politics”. “A political organisation that does not welcome the Prime Minister of the country. This is a model that India will never accept,” she said.

“Politics may be a circus for KCR’s party, but for BJP workers it is a medium for social emancipation and nation-building,” she added.

The Telangana Chief Minister, breaching protocol for the third time, deputed his proxy and Cabinet Minister Talasani Srinivas Yadav, who holds the portfolios of Animal Husbandry, Fisheries, Dairy Development and Cinematography, to receive the PM when he landed at 2.55 pm and see him off two days later.

KCR, however, did receive Opposition’s presidential candidate Yashwant Sinha at the Hyderabad-based Airport just a couple of hours before PM Modi landed at the same airstrip.