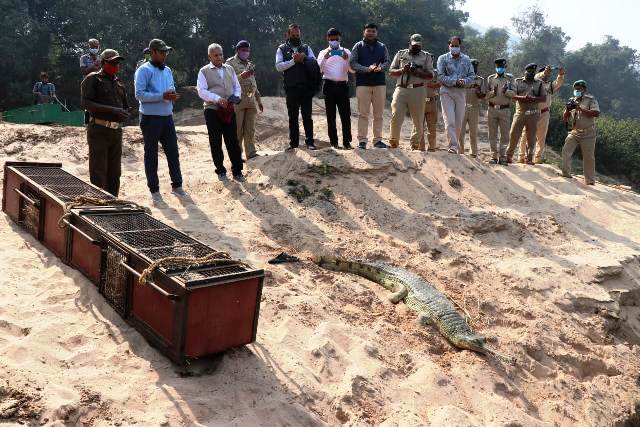 Bhubaneswar: After a fifteen-month of pilot study with release of 7 transmitter tagged sub-adult gharials since 20th July 2019, six transmitter-tagged gharials of either sex (3M:3F), measuring 2.3m-3.3m from Nandankanan Biological Park as before were released today.

The revised strategy for the recovery of Gharials in Satkoshia Gorge in its southern-most home is more conservation-oriented. This includes the involvement of five forest divisions on either side of the river Mahanadi, implementation of rigid protection measures, declaration of ‘No Fishing Zone’ in 10 Kms of Satkoshia Gorge where the present population of gharial is existing, spreading of awareness among local people, provision of compensation for the damaged fishing net and reward of Rs.1000/-for live Gharial caught.

It is hoped that Gharials will be saved in the fabled Satkoshia Gorge with future releases as programmed in the ongoing ambitious scheme the “Species recovery of gharial Gavialisganteticus, Gmelin in the river Mahanadi”.