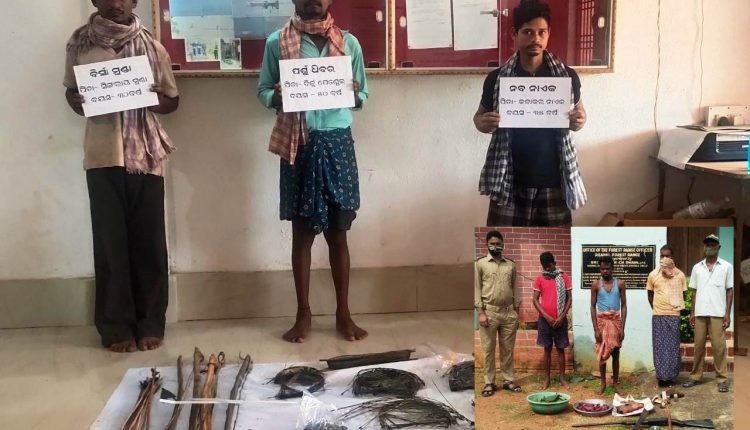 Deogarh: The forest department personnel have arrested six poachers in two separate cases in Reamal and Barkote forest ranges in Deogarh forest division and forwarded them to court.

According to reports, 14 explosives, one firearm and sharp weapons were seized from the poachers. The forest personnel apprehended three persons who had hunted a deer from the forest near Burbuda in the Reamal range and were selling the venison last night.

The arrested accused are identified as Mukteshwar Naik, Bisikeshan Kishan and Bipin Das of Burbuda village. A country-made firearm, some sharp weapons, and the remaining venison were seized from them.

Similarly, the forest official also arrested three other persons who were accused of hunting a bear and cooking the meat at Salohi village in Barkote forest range on July 2nd. The trio had managed to escape during the raid. However, they were nabbed by the forest personnel today.

The arrested accused are identified as  Birsa Munda & Parshu Dhibara of Salohi village, and Naba Naik of Kulundikudar village. As many as 14 explosives, six iron arrows, bows, gunpowder, other sharp weapons used for hunting wild animals and the hide of a monitor lizard have been from them, the forest department said.

The Deogarh DFO informed that all the accused have been forwarded to the court today.

Sri Lanka Vs India Series To Start On July 18: BCCI

Ganja Worth Over Rs 1 Crore Seized In Koraput, Two Held