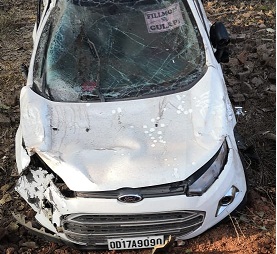 Six Hurt After Being Hit By SUV In Deogarh

Deogarh: As many as six persons have sustained grievous injuries after being hit by a speeding car at Kaibenk village under Rheamal police station limits in the district last night.

Reportedly, the incident took place, while the victims were enjoying a bonfire on the roadside. Meanwhile, a speeding car ran over the victims leaving them critically injured. Immediately locals alerted the police and rushed them to a nearby hospital.

While the health condition of 3 people is said to be stable now, three others are critical, sources said.

On the other hand, the car was reported to have crashed while on the way to the groom’s wedding procession. However, the identity of the injured driver and the two other passengers is not known so far.