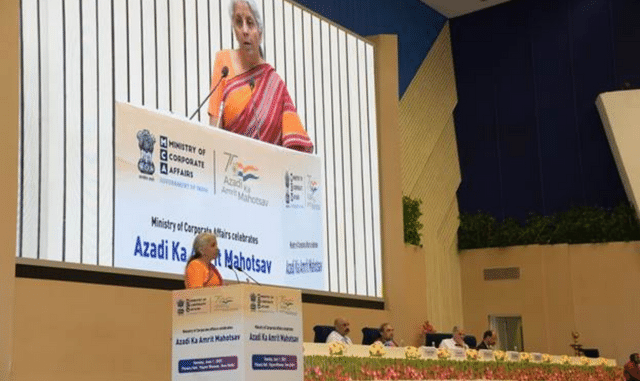 Union Minister of State for Corporate Affairs Rao Inderjit Singh graced the celebrations as the Guest of Honour besides the presence of Rajesh Verma, Secretary, MCA; Sanjay Kumar, Additional Secretary & Financial Advisor, MCA; and Ashok Kumar, Postmaster General (Operations), along with heads of other subordinate and regulatory organizations under the Ministry.

In her address during the Azadi Ka Amrit Mahotsav celebrations, Sitharaman recapitulated the reforms undertaken during last 8 years by the MCA, including enactment of Insolvency and Bankruptcy Code, Decriminalization of Companies Act 2013 and Limited Liability Partnership Act, 2008. De-criminalisation of technical & procedural violations was a very important step taken during the pandemic as PM’s message has been ‘trust your businesses, give them confidence that Government is looking at them favourably’.

The Finance Minister said, “The MCA is uniquely placed as it is facilitating people while regulating. It has impacted the lives of common Indians, be in their small businesses, or part of larger business or even small investors.”

“MCA kept itself on its toes while facing challenges due to COVID-19 and came up with different quick footed steps that even during the lockdown, people could go about their normal businesses without having to worry about compliances,” Sitharaman added.

The Finance Minister also acknowledged the importance of the Professional Institutes as well as other organisations under the Ministry, as partners in the mission of Developed India@100.

Union Minister of State for Corporate Affairs Rao Inderjit Singh in his address, stressed on the need of responsive governance, in the face of an ever-evolving corporate landscape for sustained economic growth of the country. Shri Singh mentioned that the progressive change that the country has witnessed in the last 75 years, will pave the way forward.

To commemorate the AKAM celebrations, Sitharaman released a short film on Corporate Governance; a commemorative postal stamp on Financial Literacy and Investor Awareness; and a publication on IBC “Insolvency – Now and Beyond” to mark the event. The Finance Minister also launched a special Window Facility for Senior Citizens above 75 years for seeking refund from IEPF Authority.

An Investor Oath, in the form of a short video, was also released by the Finance Minister which was witnessed simultaneously at 75 locations across India along with the launch of National Corporate Social Responsibility (CSR) Exchange Portal.

Different Organizations and Institutes under the Ministry of Corporate Affairs showcased their accomplishments at an Exhibition organised on the occasion.

Various technical sessions were organized by IEPF Authority, Competition Commission of India, Insolvency and Bankruptcy Board of India, Indian Institute of Corporate Affairs, and the Professional Institutes viz. ICSI, ICAI, ICoAI, to add to the celebration.

The Ministry of Corporate Affairs has organised more than 360 programmes on different themes under this Mahotsav in the past one year including Ideas @75, Resolve @75, Actions @ 75, Achievements @ 75; commemorating the freedom struggle. These programmes involved the participation of all key stakeholders and  promoted the spirit of Jan Bhagidari.