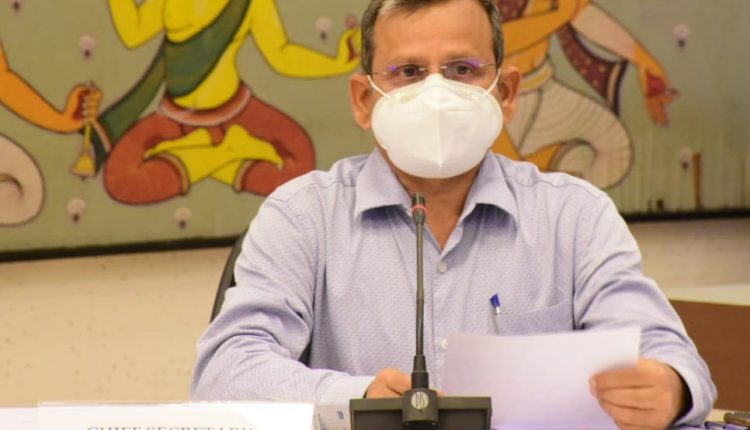 In this meeting held in virtual mode from Lok Seva Bhawan, Environment Director Mr. Sushant Nanda presented the matter related to ban on use of single-use plastic and its compliance for discussion.

After reviewing the steps taken so far in this regard, Chief Secretary Suresh Mahapatra directed the District Collectors, DFO and the field officers of the concerned departments to strictly enforce the law. Mahapatra also directed to take strict legal action against the single-use plastic manufacturing units and vendors selling them. District Magistrates and Divisional Forest Officials were asked to report every month about the compliance of plastic ban divisions in haats, markets, tourist spots, public meeting places etc in their respective areas.

Mohapatra directed Eco-clubs formed in schools, journalists, senior citizens, dignitaries, elected representatives, bar associations, Rotary and Lions Clubs and local voluntary organizations to actively participate in the campaign.It was decided to take strict action against the manufacturers, traders and vendors of banned plastic by raids at various places by the Special Squads.

In the meeting, the discussion was also held in detail on plastic waste collection and management. For this, coordination between rural retreats and urban areas will be strengthened and facilitated.

Emphasising the importance of recycling plastic waste, the Chief Secretary directed to increase its use in road construction and cement factories.

The Chief Secretary directed the Department of Forest, Environment and Climate Change to hold meetings with the officers and experts of the Pollution Control Board, Port, Rural Development, and Housing & Urban Development Department and ensure regular supply and use of plastic in road construction works. The concerned companies were asked to increase the capacity of their plants to use more plastic waste in cement production.

In the year 2021-22, more than 86 tons of plastic waste has been collected from rural areas and deposited at the nearest urban waste management centers. Apart from this, around 1,900 waste collection agencies have collected 2,301 tons of plastic waste so far. Special units have been formed in partnership with private investment to process the collected plastic before re-use. Village-level waste disposal sheds have also been constructed in collaboration with Gram Pachayat and Swachh Bharat Abhiyan.

Chief Secretary Suresh Mahapatra has also directed to bring all the gram panchayats and villages with the plastic waste collection and management program in a phased manner.

In the meeting, it was also decided to increase the efficiency of waste segregation and recycling centers and plastic conversion units.

India: Amazon Winds Down Parts Of…