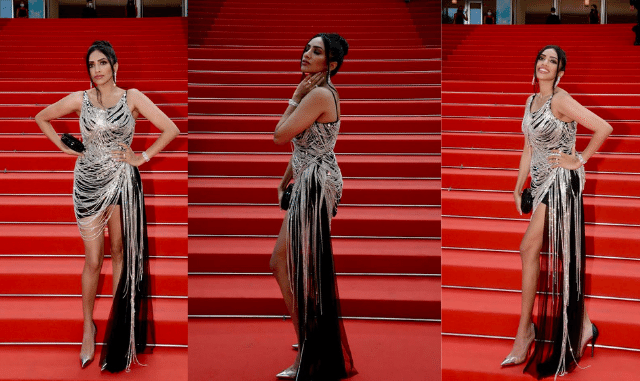 Cannes: The 75th Annual Cannes Film Festival has become the most trending event of the year and the global representation on the red carpet has been extraordinary! Marking 75 years of Indian independence, the Indian representation has been massive. While there are beloved celebrities from the Bollywood fraternity who have walked the red carpet such as Aishwariya Rai Bachchan, Deepika Padukone, Hina Khan, and many more in their fabulous couture; Indian Singer-Songwriter Raveena Mehta stands out, shimmering in her custom made Black Diamanté Chain Dress. What a beautiful sight!

Being her fourth year attending the prestigious event, she wore a custom couture gown by designer Dimple Amrin, celebrating the 75th Year i.e. the Diamond Jubilee of the event.

When asked Designer Dimple Mehta of Dimple Amrin about the inspiration for the dress, she mentioned, “the custom gown for Raveena Mehta was created with the intent of celebrating 75 years of Cannes Film Festival. 75 years is marked as a ‘diamond jubilee celebration. The first-ever diamond was found in India. So, it was only fitting to share love from India with Singer Raveena Mehta adorned in diamantés and Diamond jewellery. This being the key inspiration behind this year’s custom gown, which is bedazzled in platinum diamanté chains.”

True talent and innovation from this glorious designer, as she indeed put a shimmering mark on our country’s name! This year, the beautiful and glamorous singer will be performing at Tiffany’s Red Carpet Week Fashion Show at the Hermitage Hotel in Monaco amongst the fashion elite as well as shooting her next music video at Cannes! She is on a roll and we are here for it. We need more musicians from India to take global strides and Raveena Mehta is truly one of them.

Emerging talents from TATA IPL can be a part of Team India for the T20I series with South Africa at home, claim experts