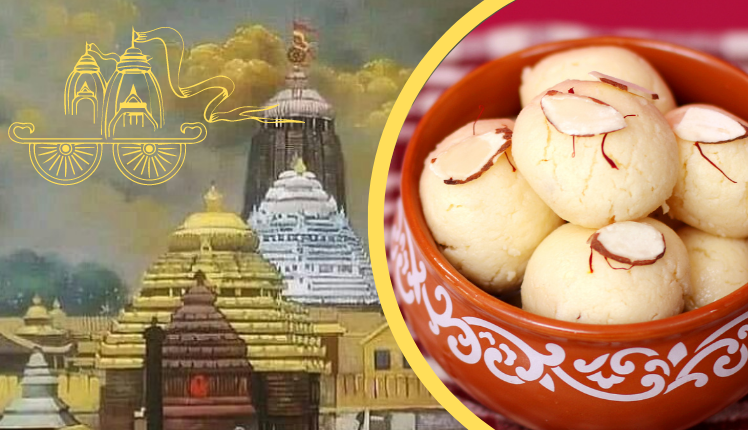 Puri: Rasagola belongs to Odisha. There’s no doubt about it. There’s lots of information and evidence to support this claim. It is one of the traditional food offerings made to Lord Jagannath.

As part of the last ritual of Rath Yatra, known as ‘Niladri Bije’ (Lord Jagannath’s return to his abode after nine days), it is offered to goddess Lakshmi on behalf of Lord Jagannath.

Lord Jagannath had gone to visit his birthplace accompanied by His brother and sister for nine days, and that had made his wife, Goddess Lakshmi angry.

It is, however, unfortunate that West Bengal has claimed itself to be the place of origin of rasagola as well as of the word ‘rasagola’.

Rasagola has been offered to appease goddess Lakshmi on the day of Niladri Bije for several centuries at Lord Jagannath temple, Puri. But many argue that the use of rasagola is not mentioned in Sattwalipi (Record of Rites of, Lord Jagannath Temple, Puri).

But then, even if there is no mention of rasagola in particular, there is mention of ‘bhoga bidhi’ (manual for food offerings) in the Sattwalipi.

Earlier, this ritual was celebrated on the twelfth day of full moon phase of the month Aashadh. Therefore, the procedure has been mentioned in the context of ‘DwadasiNiladri Bije’.

In this, it is written “Bada Thakur and Subhadra are brought to the throne. While they were brought, at the Suasari temple, Pati Mohapatra offer worship to them.

In Jagamohan the Holy Dieties are also offered worship.”56 Similarly, it is written in the context of Lord Jagannath’s ‘Niladri Bije’: When the door opens, and Lord Jagannath arrives near the place where Lakshmi is already waiting, Bhitarachha Mohapatra Sevak unties the knot of the ritual of marriage. They are offered worship. After this, Lord Jagannath sits on his throne.”

The significance of this procedure is that when Balabhadra and Subhadra are offered different delicacies at this time, Lord Jagannath is offered rasagola.

Though there is no specific mention of the food offering made here, it can be said without doubt that it is rasagola. Traditionally Bhitarachha Mohapatra prepares the rasagola in a sattvik manner at his home, and offers that to Lakshmi on behalf of Lord Jagannath.

In the Bhitarachha practice code in Sattwalipi, this finds a particular mention.

57 Regarding the ‘Bhitarachha seva’ on the day of ‘Niladri bje’, it has been mentioned that ‘this servitor offers light manohi at the meeting altar, makes light offering to garuda, while Lord Jagannath descends from the chariot and goes to sit on the jeweled throne.

While the knot of the marriage to Rukmini is untied he is offered dahi pati, ghasa, bidia manohi and Bhog offering. Since only rasagola is offered by Bhitarachha Mohapatra for ages, even though it is not written specifically, it is ‘rasagola.’

There is no mention of any other food offering nor has any other sweet ever been seen to be offered.