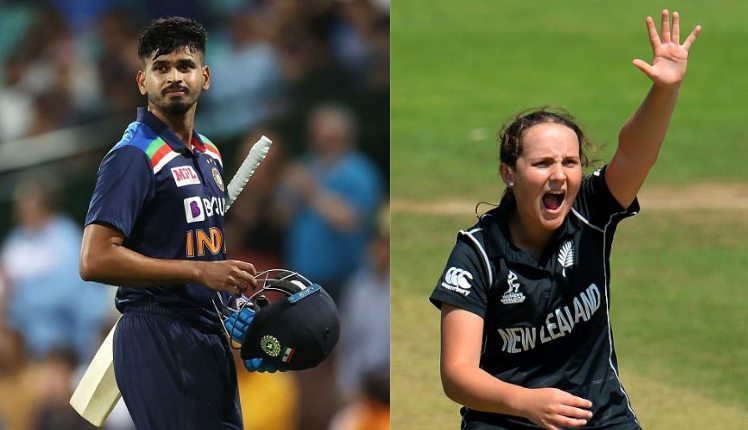 Shreyas Iyer earned the ICC Player of the Month award the back of his brilliant white-ball exploits during the home series against West Indies and Sri Lanka respectively last month. Iyer pipped fellow nominees, UAE’s Vriitya Aravind and Nepal’s Dipendra Singh Airee to claim the award. The right-hander struck a well-crafted, match-winning 80 in the third ODI against the West Indies in Ahmedabad and followed it up with a brisk 16-ball 25 in the closing game of the subsequent three-match T20I series.

He went even better in the T20I series against Sri Lanka, aggregating 204 runs without being dismissed across three innings at a highly impressive strike rate of 174.36. He registered scores of 57*(28), 74*(44) and 73*(45) across three games while striking 20 fours and seven sixes collectively in a Player of the Series performance.

“Throughout the month Shreyas showed tremendous consistency and control,” remarked former Sri Lanka cricketer and voting panel member Russell Arnold. “He totally dominated opposition bowlers and proved very hard to bowl at, scoring runs all-round the wicket and attacking the bowlers at the right moments. What really stood out for me was his composure as he battles for a regular place in the India lineup.”

The 27-year-old has carried his form in the ongoing month too, having produced an outstanding 92 in the first innings of the ongoing second Test against Sri Lanka in Bangalore.

Amelia Kerr, the 21-year-old New Zealand all-rounder, was named the Women’s POTM, following her supreme consistency with both bat and ball during the home white-ball series against India. After scoring 17 and returning 2/25 in New Zealand’s 18-run win in the only T20I, Kerr showcased exemplary skills during the ODI leg to further establish herself as a world-class cricketer.

She finished the top-run scorer in the ODI series with 353 runs at a staggering average of 117.67, while bagging seven wickets at an economy of 5.78. She was named the Player of the Match in the second and fourth ODI respectively, her standout performance coming in the former, in which she returned 1/43 with the ball before anchoring a tense 271-run chase with a sublime unbeaten 119.

Kerr was chosen ahead of fellow nominees, India captain Mithali Raj and all-rounder Deepti Sharma for the award. The Wellington-born is already being hailed as one of the best women cricketers of the modern game.

“Amelia Kerr is growing into her role as a genuine all-rounder in the New Zealand team,” said Isobel Joyce, the former Ireland Women cricketer, and a voting panel member. “She’s been a world-class leg spinner for a number of years, but now her batting adds even more value to her spot in the team and makes her one of the best cricketers in the world.”

Kerr is an integral part of the White Ferns setup at the ongoing ICC Women’s Cricket World Cup 2022 and has already racked up 111 runs and bagged five wickets from four outings thus far.

Fans can continue to vote every month for their favourite male and female cricketers across all formats of international cricket as part of the ICC Player of the Month initiative by registering at www.icc-cricket.com/awards.