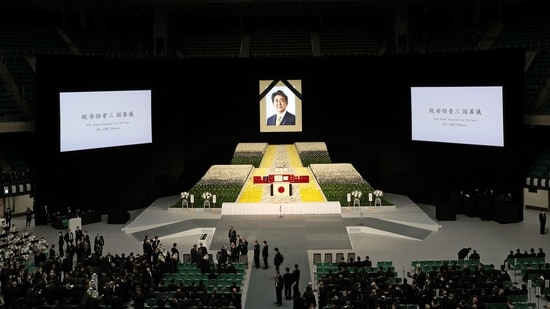 Tokyo: Japan is bidding farewell to former Prime Minister Shinzo Abe, who was killed while on the campaign trail in July, with a rare state funeral that has deeply split the nation.

At a nearby park, hundreds of Japanese people have been offering floral tributes to Abe since early in the morning.

But the event, which is costing taxpayers some $11.5m, as well as revelations about ties between Abe, his ruling Liberal Democratic Party (LDP) and the South Korean Unification Church, has prompted a huge public outcry in Japan.

Critics consider the religious group a “predatory cult” responsible for forcibly extracting exorbitant donations from its followers in Japan.

Up to 1,000 soldiers will perform ceremonial duties with a military honour guard firing 19 blank rounds from a cannon to salute the former PM.

The state funeral has begun as thousands are seated in the arena. A military band played a dirge as senior Japanese dignitaries walked in.