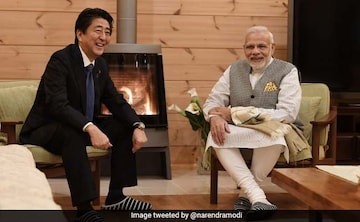 Tokyo: Japanese former Prime Minister Shinzo Abe was shot today at a campaign event on Friday, with reports claiming a man armed with a reportedly homemade gun opened fired at him from behind. Prime Minister Narendra Modi said he was “deeply distressed by the attack on my dear friend Shinzo Abe”.

“Our thoughts and prayers are with him, his family, and the people of Japan,” tweeted PM Modi.

Deeply distressed by the attack on my dear friend Abe Shinzo. Our thoughts and prayers are with him, his family, and the people of Japan.

“Such an act of barbarity cannot be tolerated,” Chief Cabinet Secretary Hirokazu Matsuno told reporters, adding that Abe had been shot at about 11:30 am (local time).

Abe’s problems on his home turf did not soil his relations with India, particularly with his “most dependable and valuable friend” Narendra Modi. When Abe stepped down in 2020, PM Modi tweeted he was “pained” to hear about the ill health of his “dear friend”. He added that under Abe, “the India-Japan partnership has become deeper and stronger than ever before.”

It is reported that Modi was an admirer of Abe and his policies even before he made his journey to 7 Lok Kalyan Marg and the respect was mutual. Abe has called Modi an outstanding leader of his great country.

As Gujarat Chief Minister, Modi had visited Japan several times and made it his first pit stop outside India’s neighbourhood as Prime Minister in September 2014. Under Modi and Abe, India-Japan ties were upgraded to “Special Strategic and Global Partnership”. The countries collaborated and cooperated on a wide range of matters from civilian nuclear energy to maritime security, bullet trains to quality infrastructure, Act East policy to Indo-Pacific strategy.

Writing in an Indian newspaper, Abe had reflected on the long India-Japan ties, noting that it was his grandfather Nobusuke Kishi who was the first Japanese PM to visit India in 1957. “At the time when Japan was not so wealthy, Prime Minister (Jawaharlal) Nehru introduced Prime Minister Kishi in front of thousands of people as the Japanese Prime Minister whom he respects,” Abe noted.

In his first stint as Prime Minister in 2006-07, Abe visited India and addressed Parliament. The first time he visited the country as PM, Abe made the famous “Confluence of the Two Seas” speech which became the benchmark and foundation for Indo-pacific ties.

During his second term, Abe visited India thrice – in January 2014 on the invitation of then PM Manmohan Singh, and then twice in December 2015 and September 2017 when the relationship with PM Modi was deepened. He was courted equally by the UPA and NDA regime.

During the UPA administration, Abe was the first Japanese PM to attend India’s Republic Day parade as the Chief Guest in 2014.

His subsequent visits to India were surrounded with much fanfare. In 2015, PM Modi and PM Abe flew together to Varanasi to witness the magnificent Ganga Aarti during the latter’s 3-day visit.

In 2017, Abe arrived in Ahmedabad to a grand welcome by his Indian counterpart as he undertook a hectic 2-day visit during which the foundation stone for India’s first bullet train was laid. Abe and his wife Akie Abe were ferried in a grand road show through the capital city of Modi’s home state Gujarat.

In 2018, PM Modi went to Japan to attend the 13th India-Japan annual summit and was hosted by Abe, in a rare gesture, at his private holiday home in the picturesque Yamanashi prefecture.

Nine Killed As Car Gets Washed Away In Uttarakhand’s Ramnagar