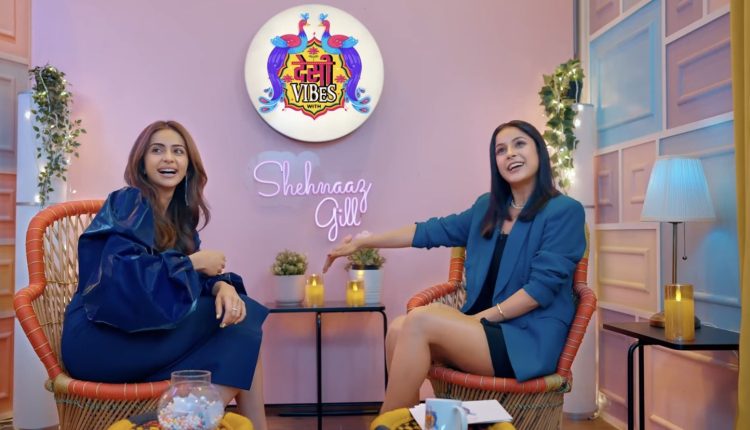 Mumbai: Shehnaaz Gill sent her fans into a frenzy as she is back with a new episode of her chat show, Desi Vibes With Shehnaaz Gill which will also mark the first-ever episode after the onset of the new year. Not only this, the episode is truly many of the ‘firsts’ since it also marks Shehnaaz interacting with her first female guest that is actress Rakul Preet Singh . Shehnaaz shared a still from the episode that has the lovely ladies sharing a fun banter with each other.

Everyone Love Shehnaaz 🤌❤️
This Is What We Want 🫶❤️#DesiVibesWithShehnaazGill
SHEHNAAZ X RAKUL PREET pic.twitter.com/hJW8pWRLjt

Shehnaaz interviewed Doctor G actor Rakul Preet Singh in the new episode of Desi Vibes. Shehnaaz shared the clip on her social media with a caption which said look at my biology knowledge.

Gill also urged the fans to watch the new video of her new interview series where she will be interviewing the cast of the upcoming film Chattrivali. Shehnaaz Gill also announced that the full episode of Desi Vibes will drop on Saturday.

Shehnaaz Gill sharing her story with sex education. She told how she once asked her mother about how she was born. Shehnaaz narrating the incident revealed her mother’s reaction and said, “My mom said to me, ‘I stood in the terrace as I prayed and Babaji dropped you from the sky and I caught you’. Ever since then, I also tried the same but hesitated to ask for the wish, as I thought it would be bad for my reputation.” As Shehnaaz shared the incident it left Rakul laughing.

Chhatriwali, the film is about the importance of Sex Education and protection.

Judge Accidentally Shoots Himself In UP Court While Wearing Gown