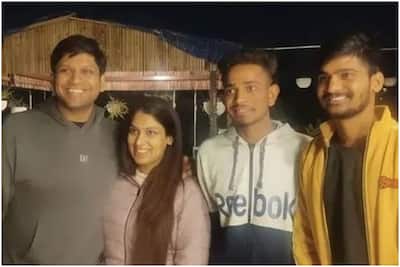 Delhi: Shark Tank India judge reportedly partied with Jugaadu Kamlesh and his cousin Naru who pitched for a hand-drawn pesticide cart for farmers on the show and won many hearts.

Bansal, who’s the CEO and founder of Lenskart, offered to invest Rs 10 lakh for a 40 per cent stake in their firm KG Agrotech and also offered a Rs 20 lakh loan with a 0 per cent interest rate. The shark was happy to meet his business partners at his home where his wife Nimisha was also present. Peyush shared a video on social media in which he revealed how Kamlesh and Naru have started to work on their business model and they had come to Delhi from Malegaon to speed up the growth.

The shark added in the video that they have now decided to rope in a designer for their cart model and their dedication seems truly impressive. All the three partners then had lunch at Peyush’s home and organised a small party on the terrace of his house.

Kamlesh also shared the video on his YouTube handle. In the video that is now going viral on social media, Peyush is even seen praising Kamlesh by telling everyone that he’s a ‘phenomenal salesman’ and he’s soon going to sell some of their products to the farmers.

3 Men Rape Minor Girl In Maharashtra’s Palghar On Pretext Of Job, One Held