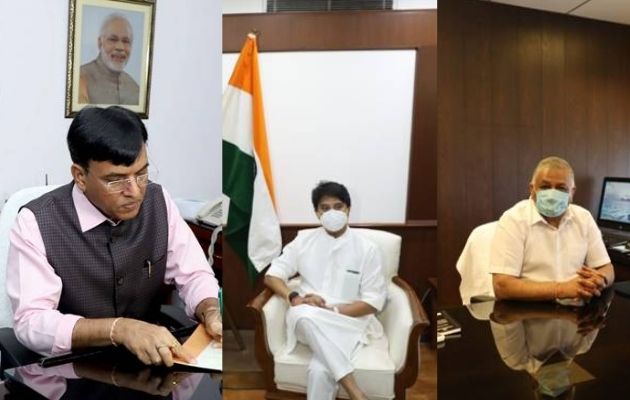 Mandaviya was welcomed by the Secretaries and senior officials of the Ministry.

In a tweet, Scindia said, “Delighted to take the baton of the Ministry of Civil Aviation from Shri Hardeep S Puri. I resolve to discharge my duties with earnestness & continue the good work undertaken by him.”

He was four times elected to Lok Sabha from Madhya Pradesh and now, it is his first term as Member of Rajya Sabha.

General (Retd.), Dr. Vijay Kumar Singh also assumed charge as Minister of State of Ministry of Civil Aviation today morning. After getting elected to Lok Sabha in May 2014, Shri V.K. Singh held various responsibilities in the Government of India.

Pankaj Chaudhary took charge as Minister of State in the Ministry of Finance. Chaudhary is a Member of Parliament (MP) from Maharajganj in Uttar Pradesh in the 17th Lok Sabha.

He is currently serving his sixth term as an MP. Active in public service for over three decades, Shri Chaudhary has also held the post of Deputy Mayor of Gorakhpur in the past.