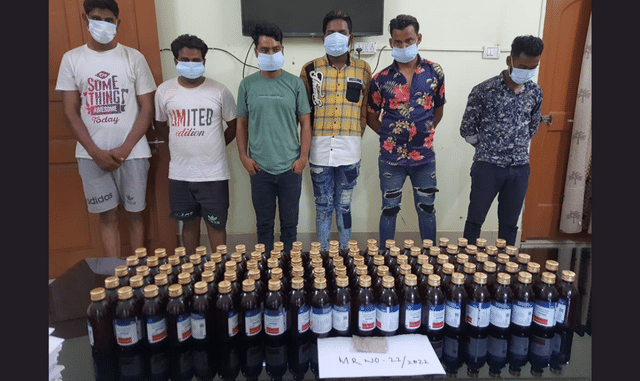 Sambalpur: The Town Police in Sambalpur apprehended seven persons after illegal cough syrup bottles and brown sugar worth Rs 35,000 was seized from them on Saturday.

Acting on reliable inputs and in compliance with the direction of Sambalpur SP, the town police conducted a raid and apprehended seven persons who were involved in smuggling banned narcotics substances in the Sambalpur SMC area.

The arrested accused have been identified as Md. Sannu (29), Md.Sahajad Alam, Sk Babar alias Sk.Rehman(22), One juvenile, hailing from Sonapali in Dhanupali area, Amir Khan alias Sharuk Khan (29) of Dalaipada in Sambalpur, Bijay Nag (38) hailing from Banjipada, Ward No.11, and Md.Safik(28) of Bheden in Bargarh.

Police said brown sugar weighing 13.080 grams was estimated to be worth Rs 13,080, 140 bottles of illegal cough syrup worth Rs 22,000, one bike having Regd no.OD15M3164, one unregistered TVS Apache 160 speed bike, and six mobile phones from their possession.

“They are transporting it from Kolkata and selling it in the SMC area. Further investigation is going on to nab the other accused person. Town PS have registered a case (251/2022)  under Sections 274/275 of the IPC and 21(b)/29 of the NDPS Act,” the police said in a press note.

Bumrah Creates History; Smashes Broad For 35 Runs In An Over!