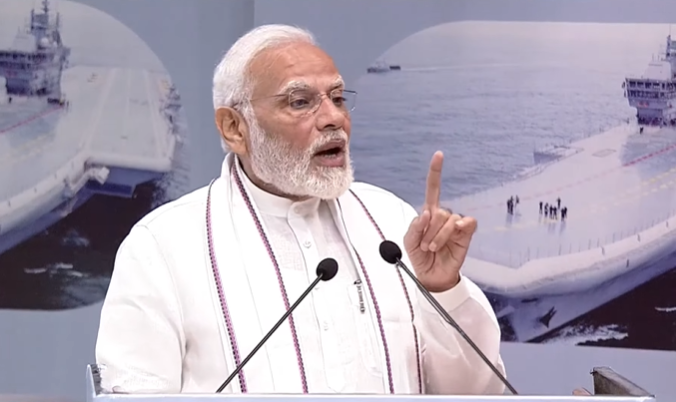 Addressing the Naval Innovation and Indigenisation Organisation Seminar ‘Swavlamban’ in New Delhi this evening, Mr Modi said organizing the first Swavlamban seminar for an Aatmanirbhar Navy is an important step in this direction.

He said the target should be to take Indian Navy to unprecedented heights when India celebrates 100 years of its independence. He added that creating 75 indigenous technologies is the first step and this number should continuously increase.

Prime Minister said India’s howitzers, and machine guns made at the Ishapur Rifle Factory were considered the best. He pointed out that India used to export a lot but, India became the world’s biggest importer in this field. He stressed that defense sector used to be very strong even before independence and even at the time of independence, there were 18 ordnance factories in the country. He said India was an important supplier of defense equipment in World War II.

Mr Modi said that in the last 8 years,  government has not only increased the defense budget, but also ensured that this budget is useful in the development of the defense manufacturing ecosystem in the country itself. He said a large part of the budget earmarked for the purchase of defense equipment is being spent in procurement from Indian companies.

The Prime Minister emphasised that like the countries who capitalized on the challenge of the World War to emerge as big arms exporters, India too turned adversity into opportunity during the COVID period and made strides in economy, manufacturing and science.

He noted that the threats to national security have become widespread now and the methods of warfare are also changing. Mr Modi said the circle is moving towards space, cyberspace, economic, and social space. In such a scenario, the Prime Minister stressed the need to move anticipating the future challenges and change accordingly.

The Prime Minister also drove home the point that war must be intensified against forces challenging India’s self-confidence and self-reliance. He added that as India is establishing itself on the global stage, there are constant attacks through misinformation, disinformation and false publicity.

During the programme, the Prime Minister unveiled ‘SPRINT Challenges’, which are aimed at giving a boost to the usage of indigenous technology in the Indian Navy.

As a part of Azadi ka Amrit Mahotsav, NIIO in conjunction with the Defence Innovation Organisation, aims at inducting at least 75 new indigenous technologies and products into the Indian Navy. This collaborative project is named SPRINT.