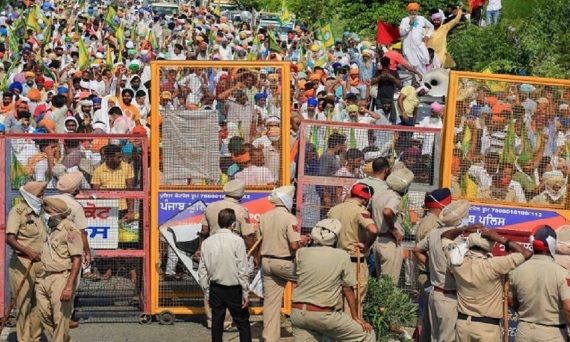 New Delhi: A day after the Supreme Court said the government’s negotiations with the protesting farmers have “not worked apparently” and it will form a committee having representatives of both the sides to resolve the deadlock, the top court will resume hearing the petition seeking removal of protesting farmers from the borders.

The farmers have been protesting against the three new farm laws brought by the Centre earlier this year from last 22 days demanding rollback of the new legislation. Due to the massive agitation by the farmer unions, mainly from North Indian states, several key routes, including the Singhu Border (Delhi-Haryana border), Tikri Border, Chilla Border (Delhi-Noida link road) are closed for traffic movement leading to traffic woes across the city.

On Wednesday, Supreme Court had said the Centre’s negotiations with the farmers “have not worked” and also talked about forming a panel with the farmer groups, government officials and other stakeholders to resolve the deadlock. However, farmer groups were not happy with the suggestion. A final verdict on the pleas against the farmer protest is expected today. Supreme Court also said the farmers’ agitation may soon become a national issue unless resolved now. Meanwhile, a Sikh preacher shot himself at the Singhu border protest, leaving behind a suicide note in which he said he has killed himself in solidarity with the ongoing farmers’ protest.