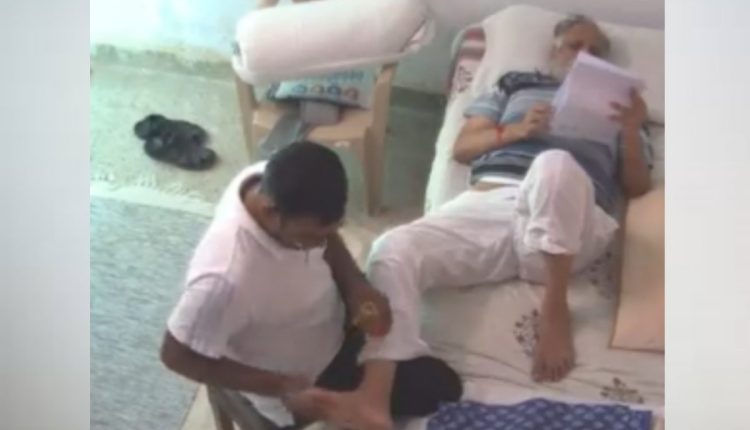 New Delhi: The man caught on video massaging the feet of jailed AAP leader Satyendar Jain is a prisoner in a rape case and not a licensed physiotherapist as claimed by the Arvind Kejriwal-led party, sources in the Tihar Jail have confirmed, adding a new twist to the row.

The ‘masseur’ seen in the security video is Rinku, a prisoner charged with rape under the Protection of Children from Sexual Offences (POCSO) law and imprisoned in 2021, official sources from Tihar Jail revealed.

The Aam Aadmi Party (AAP), responding to the allegations, called it a political witch-hunt. Party leader Gopal Rai said: “For the past 10 days, ever since AAP has launched its campaign, BJP has been trying to defame Kejriwal. Our slogan is ‘kaam kia hai, kaam karenge’, theirs is ‘badnaam kia hai, badnaam karenge’. When Amit Shah was in jail, CBI said on record that he was given a special cell. The issue is not Jain getting treatment, the issue is people will give treatment to BJP on the 4th [MCD elections].”

A series of videos released by the BJP of Jain getting ‘VIP treatment’ in prison had triggered a war of words between the two parties, with the saffron party also lodging an FIR against Jain and Kejriwal.

Jail authorities, however, claimed that the video was old and that action has already been taken against jail staffers and the officer concerned. Earlier, the Enforcement Directorate (ED) had told a Special PMLA court that Jain was enjoying luxurious facilities at Tihar Jail.