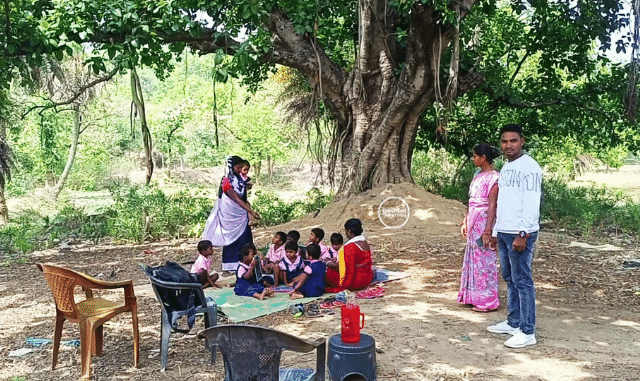 Rajgangpur: While the central and state governments have been spending crores to provide education to children along with a mid-day meal, a village in Odisha’s Rajgangpur area is yet to get its own Anganwadi centre due to the alleged apathy of the district administration.

According to sources, 13 years have passed since a temporary Anganwadi centre was introduced in Nuagaon under Bhelua Panchayat in Rajgangpur block in Sundargarh district. From that day onwards this Anganwadi centre has been imparting education to tiny tots under trees, or from different other places including verandas of villagers during the rains.

Besides, the cooked food provided to the children is also being prepared under the trees which are considered unsafe and prone to contamination.

“Despite no infrastructure, Anganwadi workers have been working for over a decade to ensure that the tiny tots complete their grassroots-level education and stay away for malnutrition. But what about the government officers who have turned a blind eye to the issue,” sources said as quoted by some local residents.

They also alleged that the Child Development Project Officer (CDPO) barely even reached office on time or before noon and dodges all-important issues raised by the people.

This points fingers towards to role of district administration in the implementation and monitoring of initiatives, sources said, adding, that all developmental works are running on paper only and have no actual implementation in the real world.

To prove their point, the locals questioned why an Anganwadi centre has not been built in the last 13 years and why the authorities concerned are yet to solve the issue.