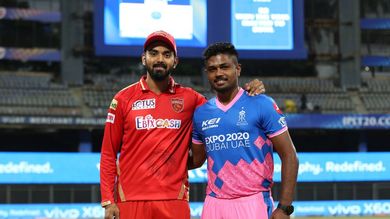 Mumbai: In the pursuit of a 222-run target, Rajasthan Royals faltered in the final over as captain Sanju Samson got out off the last ball of the match.

Chasing a mammoth total of 222, Sanju Samson anchored the run chase and became the first player to score a century on IPL captaincy debut. Samson could not finish the match as Punjab Kings (PBKS) won the match by four runs.

PBKS’s Arshdeep Singh defended 13 runs in the final over keeping Rajasthan Royals (RR) at bay. RR lost two early wickets in the powerplay overs. Ben Stokes got out for a duck whereas Manan Vohra registered a single-digit score. Jos Buttler, Shivam Dube and Riyan Parag helped with cameos but could not stay at the crease till the end. Arshdeep was the pick of the bowlers for Punjab picking up three wickets for 35 runs including Samson off the final delivery of the match.

Despite Samson’s heroics, the Kings won the last-ball thriller by four runs in Wankhede to get their campaign off to a winning start. While PBKS would like to carry the winning momentum forward, the Royals would look to get their first win of the season.

Earlier Samson won the toss and elected to field first. The decision did not work in RR’s favour as PBKS posted 221 for six wickets in the first innings.