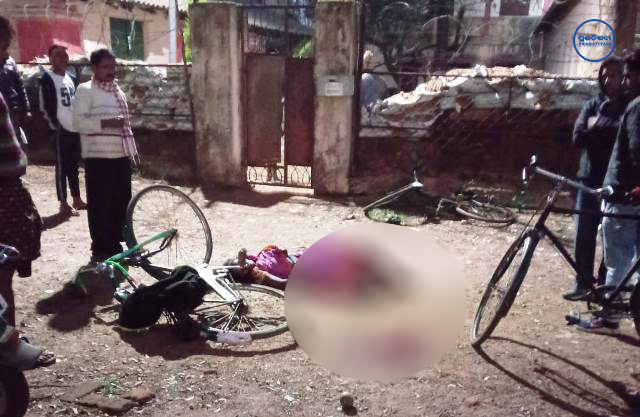 Sambalpur: Woman Hacked To Death By Kin In Front Of Police Station

Rairakhol: A married woman was brutally hacked to death allegedly by her cousin brother in front of Kisinda police station in Naktideula block of Sambalpur district on Wednesday evening.

According to reports, the brutal murder took place at around 6.30 pm. The deceased has been identified as Kumari Meher (35), of Bhatigaon in Bargarh. She is survived by her husband Deba Nanda Meher and two children. A few days ago, Kumari had come to her parent’s house in Loisinga village.

The accused, identified as Kshirod Rohidas (18), who happens to be the deceased woman’s cousin brother, is reportedly on the run after murdering Kumari Meher in front of the police station gate.

Meanwhile, Kisinda police have seized the body and launched a probe by visiting Loisinga village. However, police officials said the actual cause behind the murder is being investigated from various angles.

According to reliable sources, a family feud is the actual reason behind the murder as the families of the accused Kshirod Rohidas and Kumari had indulged in a quarrel over some issues. Following this, Kumari left for the police station this evening to lodge a complaint. But, on the way, Rohidas intercepted her and both started walking towards the police station.

However, before she could enter the police station, Kshirod attacked her with an axe leaving her dead on the spot. Soon after, the accused fled the spot.