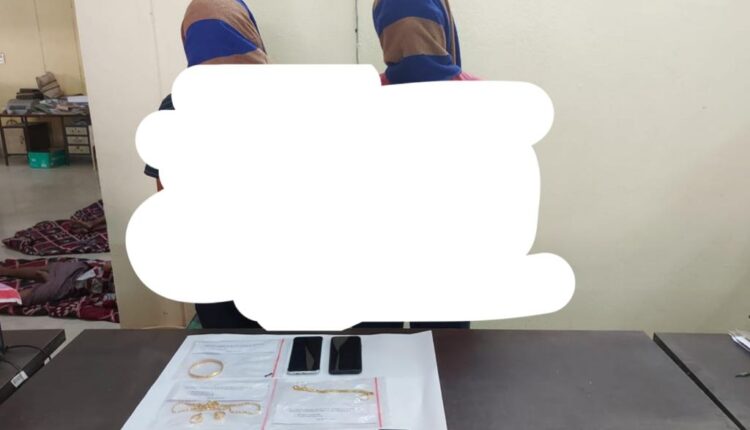 Sambalpur: Police have arrested a youth for swindling gold ornaments from a jeweller at Marwaripada in Sambalpur district and his associate, the receiver of jewellery from Mangalore.

The arrested were identified as Vishal R.N, (26) of Kempegowdanagar in DodBallapur in Banglore and the receiver Nithin Kumar B (39 ) of Ashokanagar of Dakhina Kanada in Karnataka. Two gold bracelets, one gold ring, four gold chains, one gold bangle, and three mobile phones from their possession. 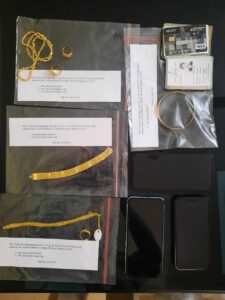 According to police, one Kanhaiyalal Agarwal, owner of the Agrawal Abhusan Jewellery Shop, at Marwaripada in Sambalpur lodged a written complaint alleging that on March 30, 2021, a person came to his shop at about 4 PM and identified himself as an Assistant Commissioner of Income Tax. He had purchased a gold bracelet and ring worth Rs 1,47,750.

During the payment process, the suspect asked the shopkeeper to furnish his account number as well as his mob no in order to send the amount to his account via NEFT transfer. In good faith, the shopkeeper furnished the details. Thereafter, the accused showed him a fake bank debit SMS  of Rs 1,47,750. Believing his version, the shopkeeper handed over the gold ornaments to the accused without any hesitation. Later on, when he came to know that he has been duped by the said fraudster he lodged a police complaint.

Following an investigation, the accused Vishal RN of Bangalore was apprehended at Bhubaneswar on April 11, 2021, and was brought to Sambalpur for further investigation.

During interrogation, the accused confessed his guilt to have committed series of cheating and misappropriation at different places including this case of Sambalpur. He has also confessed to have involved in similar types of offenses at Berhampur, Puri, Jharsuguda, Vishakhapatnam,  Hoogly, Chik Mangalore, Vapi, Gujarat, etc and had taken away huge gold ornaments.

The accused Vishal R.N, by identifying himself as an Asst Commissioner of Income Tax, committed series of crimes all over India i.e- Sai Ganesh Jewellers, Near Bus Stand, Chik Mangalore in the month of Nov-2020, taken gold ornaments weighing 32 grams of gold chain in the month of July-2020 at Hoogley, 32 grams of gold ornaments from VAPI, Gujurat in August-2020, Gold ornaments worth of Rs 1,82,000/- from Krishna Jewellery, Vishakapatnam and other places which are to be verified.

It is established that accused Nithin Kumar B had purchased the misappropriated gold ornaments from accused Vishal R.N on less price in comparison to market rate.

On the basis of this information, a police team led by Ainthapali PS IIC J. Panda, for Mangalore on April 12 to nab the culprit. The police team managed to apprehend the receiver/associate namely Nithin Kumar B at Mangalore and brought him to Sambalpur for further interrogation. The misappropriated gold ornaments, weighing about 131.98 grams pertaining to cases of Jharsuguda, Berhampur, and Sambalpur Dists, were recovered from accused Nitin Kumar B.

As prima-facie evidence during the investigation was well made out against both the accused persons. The duo was committing this crime for long. Hence, both the accused persons were arrested on April 16. in connection with this case U/s 419/420/468/471/120, (B)  IPC R/W sec 66( C)/66 ( D) of the IPC, and both were remanded to jail custody.

“Other case references are being collected. The complicity of others, if any is being verified and the investigation is in progress. Action is being taken to unearth the properties acquired by the accused persons by adopting these types of illegal means,” the police said in a press note.