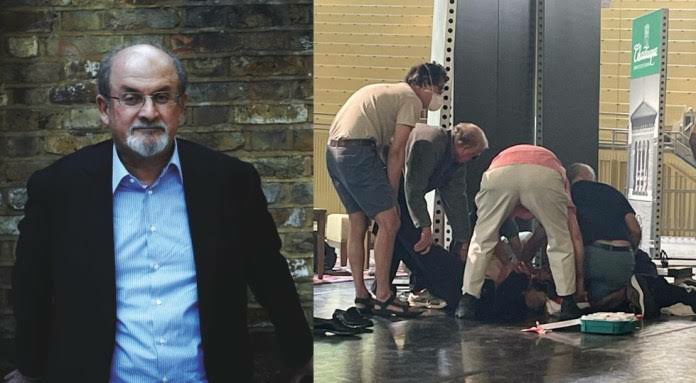 New York: Mumbai-born author Salman Rushdie, 75, was stabbed in the neck on stage during a speaking engagement in upstate New York on Friday, almost 33 years after Iran issued fatwa on him for his novel The Satanic Verses, according to police and an eyewitness.

The 75-year-old author is on ventilator and could lose an eye. Police have identified his attacker.

The author’s agent said that Salman Rushdie suffered severed nerves in an arm and damage to his liver, and could lose an eye. “The news is not good,” Andrew Wylie, his agent, wrote in an email. “Salman will likely lose one eye; the nerves in his arm were severed; and his liver was stabbed and damaged.”

Rushdie was repeatedly stabbed by Hadi Matar who rushed to the stage and attacked him. Henry Reese, the interviewer, also suffered a head injury in the attack.

Visuals and images circulating on social media showed some people in the audience rushing to the stage and taking the suspect to the ground, before a trooper present at the event arrested him.

A doctor present at the event administered medical care until emergency first responders arrived. Mr Rushdie was then airlifted to the hospital where he underwent an emergency surgery.