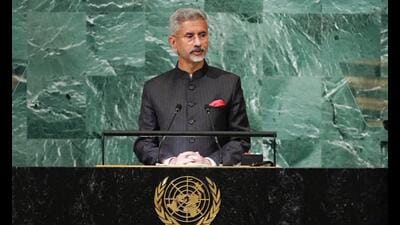 Washington: As Russia holds referendums in parts of Ukraine it controls as a prelude to their formal annexation into the Russian Federation, India’s external affairs minister S Jaishankar has said New Delhi will articulate its position on the issue at the UN.

During a press conference at the end of his 11-day visit to the US in Washington DC, HT asked the minister what he thought of the referendums and whether they aided the cause of peace and conformed to the UN charter — the two principles India has said it stands by on Ukraine.

Jaishankar responded, “I think it is an issue that will be coming up for consideration, my understanding is, in the United Nations. I would urge you to wait and see what our ambassador there has to say.”

India’s position on the referendums will be the next test for its diplomacy on the war in Ukraine. Prime Minister Narendra Modi’s comment to Russian President Vladimir Putin on how this was not the era of wars has been widely hailed by western countries.

But since Modi’s comment in Samarkand, Russia has, after having military setbacks on the ground, announced additional military mobilisation, made a nuclear threat and held a set of referendums to formally take over areas under its control.

The US has put forth a strong draft resolution at the UN Security Council that is expected to come up for discussion and a vote either at the end of this week or early next week. Those familiar with UN processes said that the resolution may be modified during negotiations, to bring on board more actors. But in any of its forms, the resolution will not carry through due to the Russian veto.

The US has said it will then take up the resolution to the General Assembly.

The draft resolution, besides holding Russia’s possession of Ukrainian territories as a violation of the “sovereignty, political independence and territorial integrity of Ukraine”, notes, “The government of Ukraine has not authorized the sham referenda held in Ukraine’s regions of Luhansk, Donetsk, Kherson, and Zaporizhzhya on 23 to 27 September 2022 and that, as such, they are illegal under international law.”

The draft resolution then condemns “the Russian Federation’s unlawful actions with regards to sham referenda taken on 23 to 27 September 2022 as attempts to modify Ukraine’s internationally recognized borders by initiating sham referenda”. It also says that Russia’s attempts to “annex the territory of Ukraine constitute a threat to international peace and security”.

The draft text also declares that the referendums “have no validity and cannot form the basis for any alteration of the status of these regions of Ukraine, including any purported annexation of any of these regions by the Russian Federation”.

It calls upon all States “not to recognize any alteration of the status of Ukraine’s regions of Luhansk, Donetsk, Kherson or Zaporizhzhya on the basis of the Russian Federation’s unlawful actions” and “to refrain from any action or dealing that might be interpreted as recognizing any such altered status”.